Nasrin Sotoudeh and Her Housband Arrested by Intelligence Agents 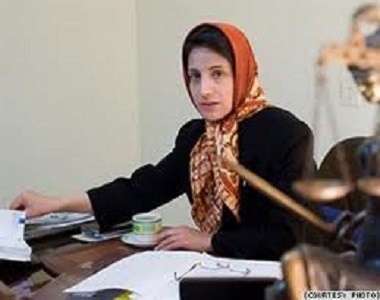 HRANA News Agency – Reza Khandan and Nasrin Sotoudeh were arrested by the Ministry of Intelligence agents when they were leaving their house. The gathering in front of the Lawyers Association was held in a security condition and the security forces took photographs and film of the participants.

According to the report of Human Rights Activists News Agency (HRANA), following a daily routine, Mrs. Sotoudeh along with her husband, Reza Khandan, were going for a sit in outside the Lawyers Association building to protest at the revocation of her Attorney license, but, this time the Ministry of Intelligence agents stopped their car in Kurdistan Motorway and detained both of them.

Indeed, a number of civil activists who had planned to join Nasrin Sotoudehon in front of the Lawyers Association on the International day of Human Rights, held the rally without her.

One of the participants in the rally, told HRANA’s reporter: “After the rally participants were chased by security guards, and later on when I tried to contact them, some of them did not answer their mobile phones.”