Nasrin Sotudeh’s sit in will continue 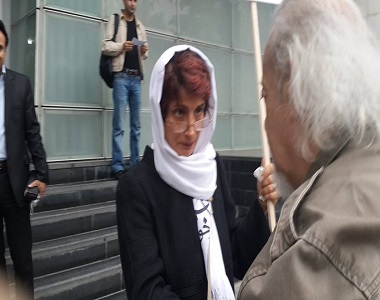 HRANA News Agency – Nasrin Sotoudeh along with Peyman Aref and Mohammad Nourizad are going to continue their sit-in in front of the Lawyers Association next day.

According to the report of Human Rights Activists News Agency (HRANA), during last week Lawyers Disciplinary Court accepted the Revolutionary Court and Tehran prosecutor’s request to cancel the license of Nasrin Sotodeh and by a verdict interdicted her for 3 years of attorney profession.

To protest atthis action, from last Tuesday she started a sit-in in front of the Lawyers Association and other civil rights activists such as Mohammad Nourizad, who had staged a sit-in in Pasteur Street to get his personal belongings, also joined her. (Mohammad Nourizad’s blongings were confiscated by IRGC forces and were not returned to him although his case was closed.)

Peyman Aref, nationalist and political activist and also a starred student (politically monitored by the university authorities), who has been prohibited from registering for PhD also joined them.

Peyman Aref wrote on his Facebook: “Tomorrow at 9 am in front of the Central Lawyers Association alongside Nasrin Sotoudeh and dear Mohammad Nourizad will stand up to call for the basic human rights such as the right for employment, education and ownership, for the dissidents. From Sunday morning I intended to sit in front of the Ministry of Science”.