One Day after Being Arrested by the Police: Ali Poladi Died

HRANA News Agency – Ali Poladi from Chaloos, was arrested by security forces in this city and taken to the Detention Center of the Police intelligence office. The next morning his family was asked to attend the station to get Ali Poladi’s corpse. This caused conflicts between his relatives and one of Police intelligence officers. Law enforcement officials have not yet provided a clear explanation for his death.

According to the report of Human Rights Activist News Agency in Iran (HRANA), a person named “Ali Poladi” from the village of Gwiter of Marzan Abad was arrested on charge of “shooting” by police officers in the district of Chaloos on Monday, January 12.

After being arrested, the person was transferred to Chaloos police intelligence office.

His family who was trying to get information about the fate of their son, was informed that the 26-year-old man had died at the detention center and the family needed to take delivery of the body, in the morning of January 13.

In a conversation with HRANA’s reporter, Ali Poladi’s brother confirmed the news and said; “Ali had no particular illness and he was in complete health at the time of arrest.” 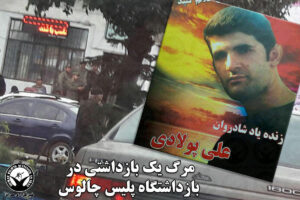 It is said that in response to the pursuit of these people, an officer, “Captain Roozshad”, offended the family, causing a physical conflict between the attendants and the abovementioned officer.

Police forces have dispersed the protesting crowd. However, there is still no clear explanation as to the reason for the death of this person in the detention center.

It should be mentioned that in recent days, at least three other detainees, Sina Ghanbari (Evin – Tehran), Vahid Heidari (Arak police station) and Sarou Ghahremani (Sanandaj Intelligence Detention Center), died after being arrested.