A report on The Quality of Life in Abu Musa Island; The Victims of Politics and Conflicts 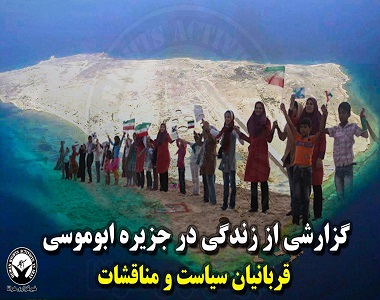 HRANA News Agency – Abu Musa is Iran’s smallest county and the farthest point on the southern border of Iran. Abu Musa is an island 222 Km from Bandar Abbas (capital of Hormozgan Province) where with the promises of a better life by the officials, people from all over the country have settled in; yet these mostly migrant workers are facing many difficulties. Healthcare, education, transportation and employment are just to name a few of the daily concerns of the residents of Abu Musa.

Based on the HRANA’s field research, Abu Musa Island and its residents despite being Iranian citizens, do not enjoy the same rights and conditions as the rest of the country and its residents. What really feeds into this inequality is the politicization of the region and the impact of the regional conflicts on the everyday lives of the residents.

Abu Musa Island is considered a strategic point in Persian Gulf and is part of the first defence line of Iran in the Strait of Hormuz; this island is one of the countries crude oil export centers which works with a significant capacity. Abu Musa along with Greater and Lesser Tunb have great strategic importance and insure the dominance of Iran over a considerable part of the southern Persian Gulf, in particular its control over the Strait of Hormuz. In addition to the strategic importance, it is also important because, due to its suitable depth the only vital passage for the tankships and warships is located between these islands. Iran and UAE have been in conflict for a long time over the control of Abu Musa Island. Due to Abu Musa’s strategic and political location it has been a full-fledged military island, yet the authorities have attempted to make this island more residential in order to avoid the military strike by the allies of UAE on the island.

Therefore in addition to the local residents, people from across the country have flocked to Abu Musa Island with the promises of unique accommodations made by the authorities. The migrants were promised of special accommodations and privileges such as free housing, water, electricity, transportation, medicine and healthcare. But based on the reports of HRANA by multiple interviews with the residents of this island, most of these promises were never fulfilled. One of the residents of this island has told HRANA: “Pars hospital of Abu Musa is only a building with a sign of hospital hanged over it! With 3 empty beds! There is no emergency equipment in this so called hospital! And it depends on the patient’s luck to survive until transfer to Bandar Abbas or Bandar Lengeh.” He added that his two children, 17-year-old daughter and 20-year-old son, respectively 3 and 4 years ago have passed away because of the lack of medical equipment.

Another unhappy resident told HRANA: “There is no specialist. There are only a few general practitioners. The Abu Musa hospital lacks ICU, CCU, Obstetrics and Gynecology, CT scan, cardiac intensive care, all surgeries, kidney and dentistry etc. We also live in poverty and in deprivation of medicines.”

The students at Abu Musa Island are facing school shortage. And at the level of high school not all the courses and majors are offered on this island, therefore many students are forced to take on any available major without having a choice.

In higher education also, there is only Payame Noor University which only offers a few general majors such as tourism, business management and law. Because of the unsatisfying job market these fields are not appealing and do not trigger the residents to take on higher education.

One of the current students of this university by addressing his demands told HRANA: “All the professors of this university come to Abu Musa on weekly bases from Bandar Abbas, and as soon as the lectures are over they take the first flight back to Bandar Abbas! Also most of the students are from other counties and need to travel by airplane on weekly basis. Recently with the curfews and the cancellation of flights Payame Noor University branch of Abu Musa has been left without students, professors and lectures.”

Due to the unusual structure of the island with the integration of residential and military, there is no job market other than the local jobs such as fishing, a resident of this island has mentioned: “Just like other parts of the country, here as well, there are career opportunities for those related to or favored by the authorities. However the authorities constantly say ‘the residents and youth are in the priority when it comes to hiring’, yet contrary to this claim has been proven to us.”

One of the fishermen about the conditions of this field told HRANA: “Hard working Fishermen of Abu Musa work tirelessly and with an extraordinary effort in order to earn righteous income for their families. Yet in return, none of the officials support and defend the rights of fishermen. The price of fish has never risen (considering the countries inflation rate) and even at times with excuses they lower the fish price. And as soon as a fisherman complains the government immediately threatens to invalidate his fishing license and seize his boat.” This fisherman who was talking amongst his colleagues added: “Mackerel fish is sold for 270000 IRR/Kg, in Bandar Abbas and there they fish with net, but in Abu Musa although we fish with rods which yields better quality compared to fishing with nets (in Abu Musa all fishermen are required to fish with rods), mackerel is sold only for 170000 or even at times 140000 IRR/Kg. Emperor Fish is sold for 150000 IRR in Bandar Abbas and in Abu Musa for 70000 IRR. Red mouth Grouper is sold for 160000 IRR in Bandar Abbas and only for 75000 IRR in Abu Musa, and so on. During the month only 10 to 15 days the fishermen in Abu Musa can fish because mostly the Islamic Revolutionary Guards Corps (IRGC) and the navy are performing naval maneuvers and shootings. There are many excuses that hves deprived us from earning and feeding our families.”

There is no working facilities and possibilities for the welfare, sports and teaching and training of the youth and residents.

A young resident of this island told HRANA: “Although we are leaving on an island, there is no marine entertainment, marine sports or marine classes and trainings such as scuba diving and lifeguarding.”

The most accessible way of travelling to the province’s capital (Bandar Abbas) is by an airplane, considering the distance and the fact that Abu Musa is an Island and there is no connections to any land. The small and semi-military airport of Abu Musa hosts a flight once a week to Bandar Abbas, but this service has been suspended for the past 8 months due to the failure of the airline company to pay its debts.

For the past 8 months, the lack of weekly flights that the government is responsible for financing has created serious commuting problems for the citizens of Abu Musa, and they are facing great difficulties in receiving medical services and providing for their families.

Last month, after protests by Abu Musa residents to the lack of transportation services, an old passenger ferry was designated for transferring passengers to Bandar Abbas, however, the ferry caught on fire on its first 200 Km trip to Bandar Abbas, and with 150 people wounded the ferry docked at Bandar Lengeh, where the wounded were transferred to a hospital.

IRGC is the absolute Ruler here!

Many of those residents who have been contacted by HRANA, have mentioned that Abu Musa is a military Island, with vast numbers of military facilities and IRGC forces. But due to the hostility with UAE over the ruling of Abu Musa, the island is controlled by different military strategies.

One of the residents emphasizes: “The city governor is just a political decoration, and due to the sensitive political and strategic importance of Abu Musa, its people are facing injustice and unfairness. A small part of Abu Musa belongs to UAE (Sharjah) where some citizens of UAE are residing. UAE pays its citizens special salaries and benefits, a salary equal to 10 to 40 million in a month! And they commute with the best ships to UAE. The Iranian government should have given us special benefits as well, but unfortunately we are not even given our well-deserved pay, let alone benefits.”

Even though the housing is the responsibility of the government, the residents of Abu Musa live in dilapidated homes and ruins that is while the authorities and the military personals (especially the IRGC) live in great newly built houses.

Below pictures show the contrast between the homes of ordinary residents of the island and the newly built gated communities that are home to IRGC: