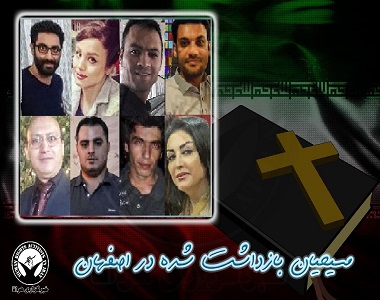 HRANA News Agency – On August 12, eleven members of a house church in Isfahan were arrested and transferred to an unknown location. The fate and whereabouts of detainees remain unknown.
According to the report of Human Rights Activists News Agency in Iran (HRANA), Mohammad Ilyas, Mohsen Khubyar, Edmund Khachatvryan, Mohammad Malek Khataiee, Samaneh Shahbazifar, Arash Ghodsi, Fatemeh Amini, Maryam Zenobi, Amin Ahanin, Hamid Sepidar along with another unidentified person while having gathered to worship were arrested by plainclothes security officers.
According to eyewitnesses, armed security forces transferred detainees along with a number of books, pamphlets and satellite reception equipment to an unknown location.
There is no news of the fate and whereabouts of detainees yet.