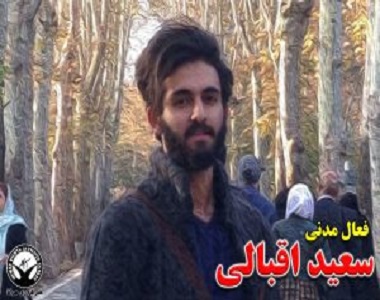 HRANA News Agency – Saeid Eghbali, civil rights activists, who was arrested along Golrokh Irai, was released after being transferred to ward 2-A of the IRGC. He needs to appear in the court soon, regarding the laid charges.

According to the report of Human Rights Activists News Agency (HRANA), Saeid Eghbali, civil rights activist was arrested along Golrokh Irai, on January 22, and transferred to ward 2-A in Evin prison.

Mr. Eghbali, who is a friend of Arash Sadeghi and Golrokh Irai, had faced different charges during interrogations in ward 2-A, which is an amalgamation of his posts in social media.

Despite the short time of his detention, interrogators showed him a paper and told him that his case was sent to the court.

Insulting the supreme leader, insulting officials, disregarding orders of Quran and opposing death penalty, supporting security prisoners, being in contact with Shahin Najafi, sacriledge and attending the meetings of mothers of political prisoners and victims of 2009 and executions, are some of the charges against him.

A close source to Saeid Eghbali told HRANA’s reporter, “It is interesting that the case was completed and sent to the court before the arrest was made. Saeid is told that he would be contacted by the court regarding submitting his cellphone, and after that he was released temporarily until his trial session”.