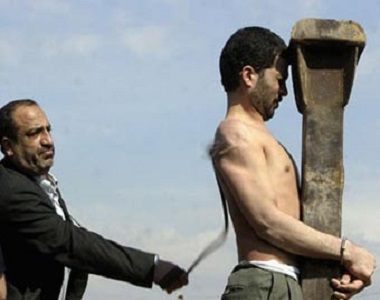 HRANA News Agency – The lashing sentence of a prisoner has been fulfilled in public in Abyek.

According to a report by Fars, a prisoner has been whipped in public in Ziyaran village of Abyek. He was named as a rabble.

This sentence was fulfilled in the presence of the judicial authorities of Abyek in the main crossroad of the village. The prisoner is M-Sh known as M-Ghazvini.

M-Sh, 24 years old was arrested last March charged with intimidation and threatening the cars who wanted to enter Abyek by the police forces.