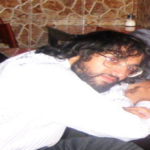 HRANA News Agency – Security agencies prevent Ahmad Asgari, ill political prisoner from being released despite his eligibility for freedom. Mr. Asgari is sick and is in a critical condition also needs to take care of his mother as the only surviving member of the family who suffers from cancer.

According to the report of Human Rights Activists News Agency in Iran (HRANA), Ahmad Asgari, student of International Relations, Faculty of Political Sciences of Tehran University, and political prisoner in ward 8 of Evin prison suffers from epilepsy. END_OF_DOCUMENT_TOKEN_TO_BE_REPLACED

Ahmad Asgari In a Critical Health Condition in Evin Prison

HRANA News Agency – The physical and mental condition of Ahmad Asgari, an imprisoned journalist, have been reported to be poor and inappropriate after being held in Evin prison for over 6 months.

According to the sources of Human Rights Activists News Agency in Iran (HRANA), Ahmad Asgari suffers from epilepsy and a serious mental disorder and although his solicitor has requested to issue a punishment intolerance order, the judicial authorities have not given an answer, yet. END_OF_DOCUMENT_TOKEN_TO_BE_REPLACED

No information about the arrested journalist

HRANA News Agency – Although Ahmad Asgari has been arrested more than one month ago there is no information about his situation yet.

According to a report by Human Rights Activists News Agency (HRANA), Ahmad Asgari, the journalist, student activist and International relations student of political since faculty of Central Tehran Azad University has been arrested in Fadak park in Tehran on June 20, 2013 by intelligence agents. END_OF_DOCUMENT_TOKEN_TO_BE_REPLACED