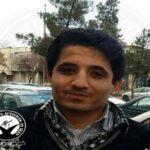 HRANA News Agency – Amanj Vaisi, juvenile offender who was arrested and sentenced to death on charge of murder when was 15, is still being held in prison in Marivan after 10 years in the shadow of death. He is not a child any more.

According to the report of Human Rights Activists News Agency (HRANA), Amanj Vaisi was born on July 11, 1991. When was 15 years old, he was arrested because of murdering his cousin and was later sentenced to death. He has been living on death row for 10 years so far. END_OF_DOCUMENT_TOKEN_TO_BE_REPLACED