Five political prisoners are on hunger strike in Tabriz prison 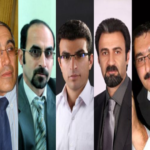 According to a report by Human Rights Activists News Agency (HRANA), Pour Bagher the judge of the branch third of the revolutionary court of Tabriz has sentenced each one of the arrested activists, Latif Hassani, Mahmoud Fazli, Shahram Radmehr, Ayat Mehr Ali Bayglu and Behboud Gholi Zade to 9 years of prison on charge of forming illegal group and propaganda against the government. END_OF_DOCUMENT_TOKEN_TO_BE_REPLACED

And also,Iranian police have arrested five members of an underground band suspected of producing music for Farsi-speaking, dissident satellite channels based in the U.S.