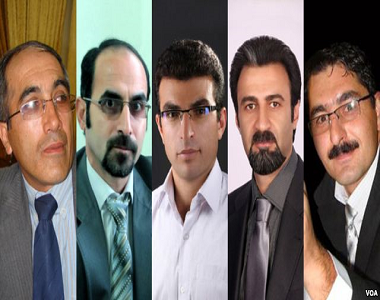 HRANA News Agency – Each of 5 Azerbaijani political activists have been sentenced to 9 years of prison.
According to a report by Human Rights Activists News Agency (HRANA), Pour Bagher the judge of the branch third of the revolutionary court of Tabriz has sentenced each one of the arrested activists, Latif Hassani, Mahmoud Fazli, Shahram Radmehr, Ayat Mehr Ali Bayglu and Behboud Gholi Zade to 9 years of prison on charge of forming illegal group and propaganda against the government.
The intelligence of East Azerbaijan province and the prosecutor of Tabriz have asked for the highest punishment for them.
“These political activists had been arrested last February by the intelligence of Tabriz and were under integration and torture in Tabriz intelligence. They were transferred to Tabriz prison afterwards and are there since now.” Said one of their relatives to HRANA
Their sentence has been sent to one of their lawyers, Mrs. Fateme Sattari. Each of them is sentenced to 8 years of prison charged with forming illegal group and 1 year of prison on charge of propaganda against the government.