Arash Sadeghi Released on the Bail 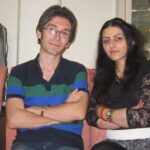 According to the report of Human Rights Activists News Agency in Iran (HRANA), Arash Sadeghi who was arrested on 6th September by the Revolutionary Guards’ security forces and was taken to ward 2-A in Evin Prison, was released on a bail of 600 million Tomans on Saturday 15th March. END_OF_DOCUMENT_TOKEN_TO_BE_REPLACED