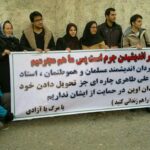 HRANA News Agency – For the second day, some of the followers of Mohammad Ali Taheri gathered in front of Evin prison within a campaign called “migration to prison” and some were arrested and transferred to an unknown location.

According to the report of Human Rights Activists News Agency (HRANA), a group of Mohammad Ali Taheri’s followers gathered in front of Evin prison and asked to be arrested, on Thursday December 15, 2016. They stated that beating Mr. Taheri and his followers is unjustifiable and announced that “if being like Mr. Taheri is a crime, then we are also criminals”. END_OF_DOCUMENT_TOKEN_TO_BE_REPLACED