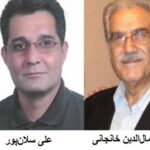 HRANA News Agency – “Ali Salanpour” and “Jamaloddin  Khanjani” were sent to hospital outside the prison but later returned to Rajaee Shahr Prison after receiving unsuitable treatment.

According to the report of Human Rights Activists News Agency (HRANA), On 27 September, 2014, “Ali Salanpour” a Political Prisoner at Ward 12, Rajaee Shahr Prison who is suffering from Cervical Disc was sent to a hospital outside the prison. END_OF_DOCUMENT_TOKEN_TO_BE_REPLACED