Four Kulbars were killed or injured by police shot 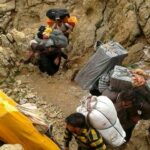