On Thursday, October 14, Sunni prisoner Zaher Roozkhun was released temporarily on bail until the end of criminal proceedings.

According to HRANA, the news agency of Human Rights Activists, quoting Kurdpa, Mahabad resident Zaher Roozkhun was released on bail for 350 million tomans (approx. 13,000 US dollars). He has been denied access to lawyer and family visitation during the detention.

Roozkhun had been previously arrested by security forces before too on August 29, 2021. After completing the interrogation process, he was sent from a detention center in Urmia to Mahabad Prison.

As of writing this, the reason for his arrest and the charges is unknown. 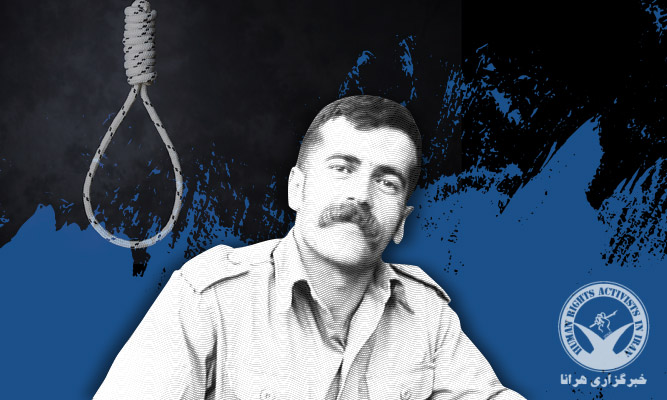 Branch 31 of the Supreme Court of Iran recently confirmed the death sentence of political prisoner Shaker Behruz, who is currently being held in Urmia Prison, despite a strong alibi pointing to his innocence.

According to HRANA, the news agency of Human Rights Activists, Branch 31 of the Supreme Court confirmed the death sentence of 33-year-old Shaker Behruz last Tuesday, October 5. The verdict was confirmed in spite of the alibi statements of 12 witnesses, all of whose testimonies the court refused to hear.

The indictment alleges that Behruz murdered a member of the Islamic Revolutionary Guard Corps (IRGC).

According to an informed source, security agents threatened the victim’s family’s, who was an IRGC member, to cut their allowance from the Foundation of Martyrs and Veterans Affairs, if they refused to accuse Behruz.

Twelve eye-witnesses signed a statement expressing their readiness to testify that Mr. Behruz was in his shop when the crime was committed. Despite all the above, the court convicted the defendant without the presence of the family as accusers and hearing of eye-witnesses. 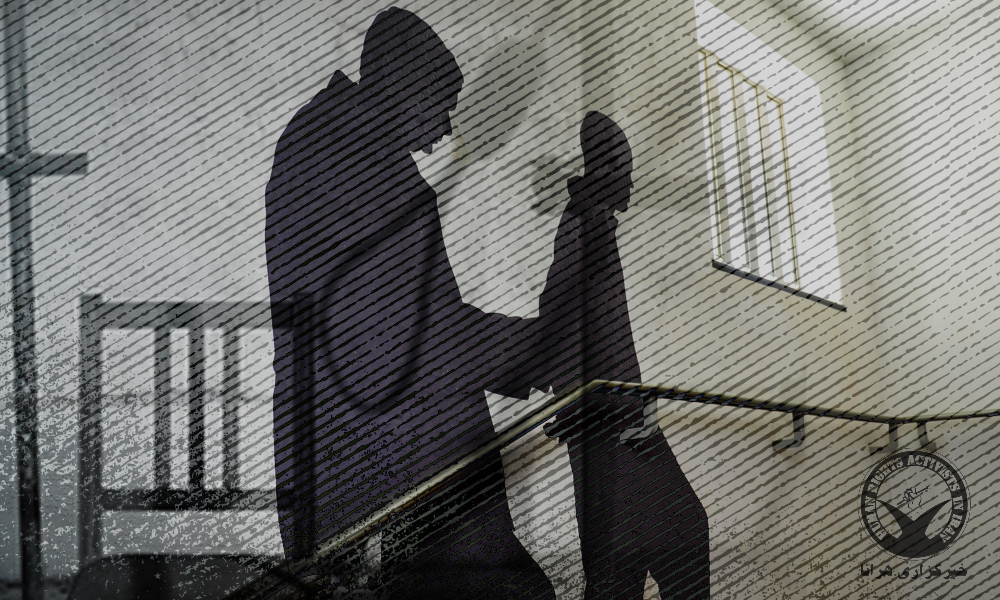 Recently, two men facing death sentences were spared from conviction while a third was sentenced to death.

According to HRANA, the news agency of Human Rights Activists, quoting Dideban,  one man in Tehran was sentenced to death on a charge of murder on Wednesday, 29 September.

Two men were spared from execution in separate criminal lawsuits, in Urmia and Karaj respectively. Both cases were ruled upon exacting satisfaction from the “avenger of blood”, meaning that the victim’s relative or closest acquaintance agreed to refrain from demanding the perpetrators’ execution.

A man indicted for murder was sentenced to the death penalty. He was detained after one man was stabbed to death in a street fight that took place in a park in Islamshahr, July 2018. This 30-year-old man, named Mahmoud, has denied the charge of first-degree murder and claimed that his actions were self-defense.

According to IRNA, a death-row inmate in Urmia Prison, after 11 years imprisonment, could exact the satisfaction of ‘blood avengers’ with the mediation of elders of the community.

The second spared inmate was a 20-year-old Meysam, who was sentenced to death on a charge of killing a 21-year-old man in a fight. After 5 years, he could exact the satisfaction of the victim’s parent by paying 2.5 billion tomans as reparation. 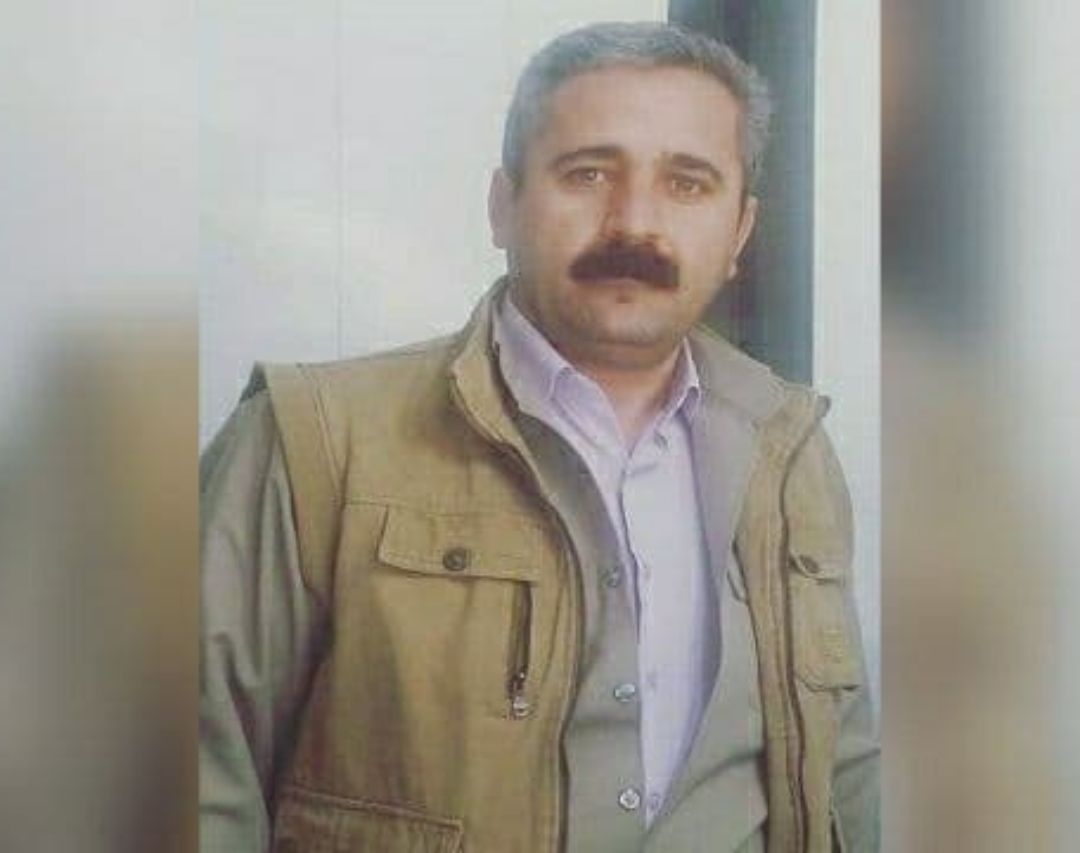 According to the HRANA, the news agency of Human Rights Activists, quoting Kurdpa, Rabt was a native of Sheshmal village in the Urmia area. He was a husband and father of three.

Rabt was arrested four years ago on drug-related charges and later sentenced to death by the judiciary.

Iran ranks first in the world in citizen executions per capita, according to international organizations. The Statistics and Publication Center of the Human Rights Activists in Iran (HRA) reported that between January 1 and December 20 of 2020, at least 236 citizens were executed. One of these citizens was executed publicly, and two were juvenile offenders. 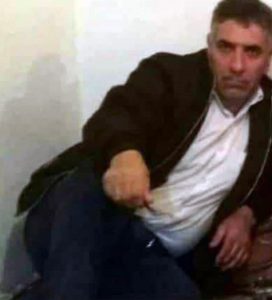 On Thursday, September 16, 22-year-old Amin Hassanpour from Urmia was violently arrested by security forces without a court order.

According to the HRANA, the news agency of Human Rights Activists, quoting Center of Democracy and Human Rights in Kurdistan, Hassanpour was transferred to an unknown location following his arrest, during which he was reportedly beaten.

As of this writing, no information is available on the reasons for Hassanpour’s arrest or the charges against him.

On Saturday, August 28, a defendant named Elmira Habibi went on a hunger strike in the women’s ward of Urmia Prison.

According to HRANA, the news agency of Human Rights Activists, 33-year-old Elmira Habibi,  a native of Urmia, was imprisoned after being convicted of financial crimes.

Ms. Habibi has been on a hunger strike to protest her unfair trial and the lack of accountability from officials. 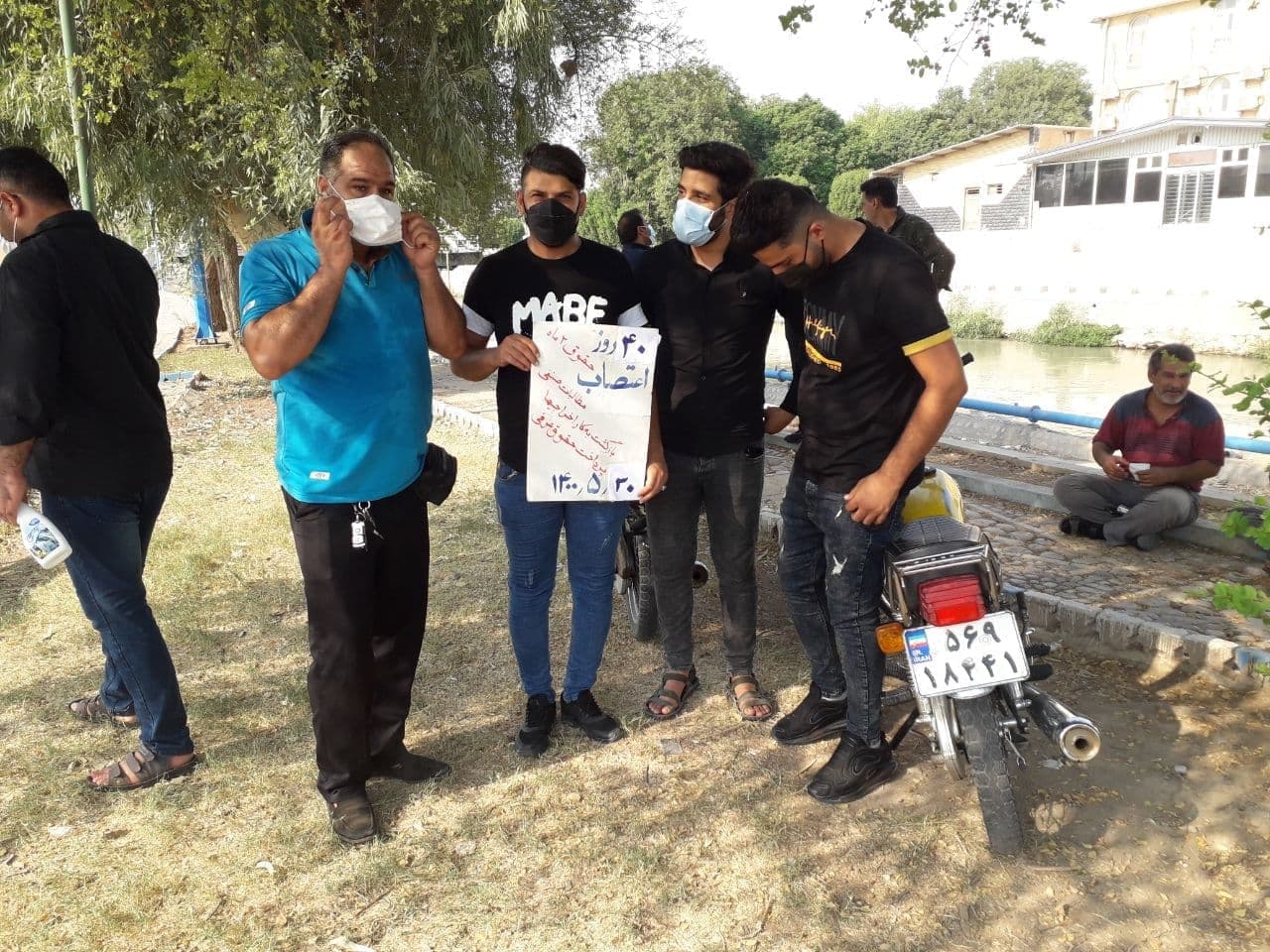 A number of protests took place this week in Iran, many of which were continuations of ongoing movements. According to HRANA, the news agency of Human Rights Activists, employees of Haft-Tappeh Sugarcane Agro-Industry Company continued their protests for a 7th week. Read our recap below for details, photos, and videos from the demonstrations.

Workers of Azarkam Company in Urmia: 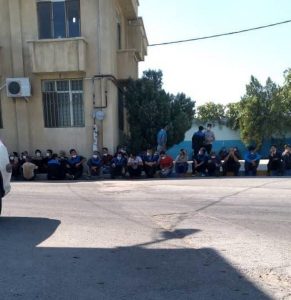 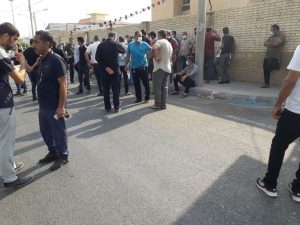 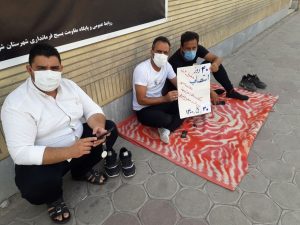 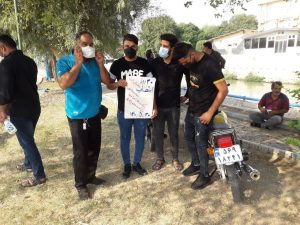 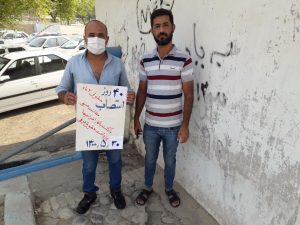 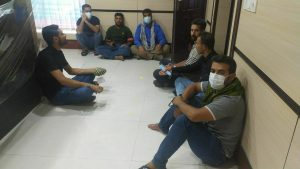 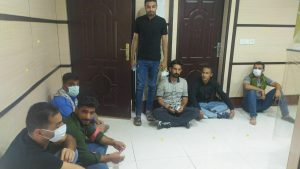 A group of workers of Haft Tappeh Sugarcane Agro-Industry Co for the 41st consecutive day, as well as several young people from Qala-e-Chenan village of Kut Abdollah district in Khuzestan called for their demands to be addressed this Sunday. 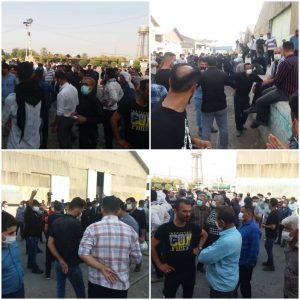 This Monday, several workers in Asaluyeh in Pars Special Economic Energy Zone, a group nurses in the cities of Tehran and Sari, a group of medical staff in Babol, a number of municipal gardeners in Kut Abdollah, and a group of shareholders of the Pardis-e-Rasht Housing Investment Company held protest rallies.

Nurses in Tehran and Sari:

A group of workers of Bostan Municipality located in Dasht-e Azadegan city of Khuzestan, and a number of bus drivers in Qazvin in protest rallies called on their demands to be addressed. 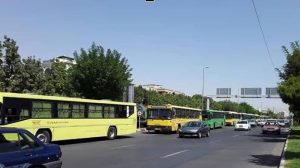 A group of bus drivers in Urmia, and workers of the oil project in Izeh in protest rallies called on their demands to be addressed.

Workers of the oil project in Izeh: 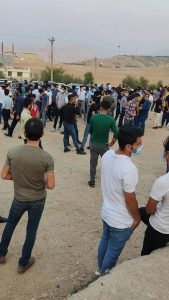 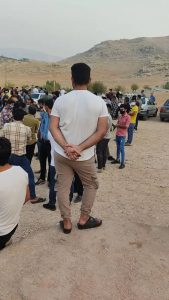 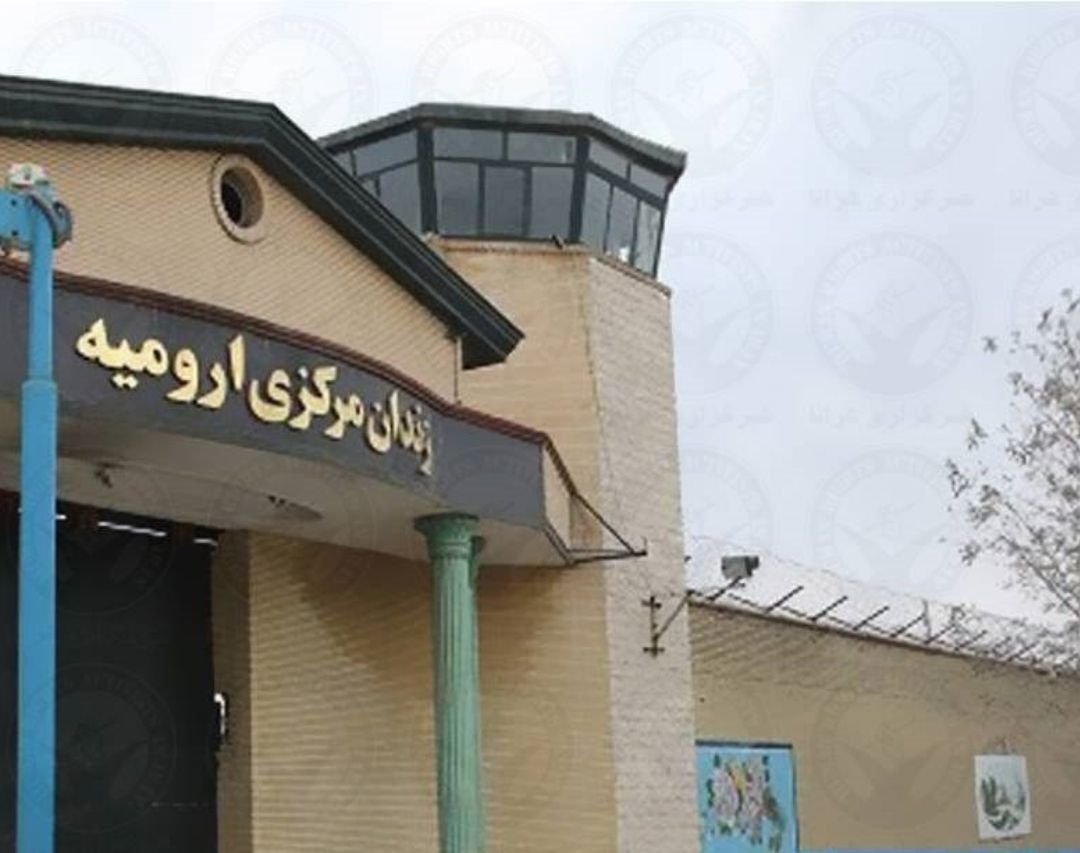