A prisoner has been hagned in public in Isfahan 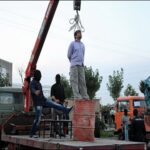 HRANA News Agency – A prisoner has been hanged in public in Khomeini Shahr on charge of drug trafficking yesterday morning.

According to a report by IRIB, the prosecutor of Khomeini Shahr said: “This prisoner was 32 years old and had been arrested in 2011 on charge of having 740 gr. Krack.” END_OF_DOCUMENT_TOKEN_TO_BE_REPLACED

Another civilian is sentenced to death in Khomeini Shahr 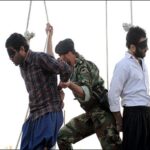 HRANA News Agency – One other of those who are accused in a case in Khomeini Shahr will be hanged.

According to a report by Mehr, Mohammad Reza Habibi said: “This case is on the legal process. As we have said before 4 of those who were accused in this case are already hanged and the other on is sentenced to death which has been confirmed by the Supreme Court and will be enforced in a proper time. END_OF_DOCUMENT_TOKEN_TO_BE_REPLACED

HRANA News Agency – On Wednesday, October 12, 2011, four individuals convicted of rape were publicly hanged in Khomeini Shahr’s Behesht Park.After the death sentences were upheld by the Supreme Court, four rapists were hanged today while the Public and Revolutionary Prosecutor of Esfahan Province and other local officials attended the event.

According to a report by Fars News Agency, the following individuals were hanged today after being convicted of charges of rape in Khomeini Shahr:

On May 24, 2011, a group of women at a private party were abducted and gang raped at knife point in Khomeini Shahr.

More pictures of the public hanging can be seen here.