A Daily Overview of Human Rights Violations in Iran for December 10, 2018

The following is an overview of human rights violations in Iran on December 10th,2018 based on the information compiled and verified by Human Rights Activists NewsAgency (HRANA).

Inthe last two days, four workers were injured or died in their workplaces in Iran. Two workers who were 35 and 40 years old and citizens of Afghanistan, were injured in a construction incident in Tehran. According to Iranian Labor News Agency (ILNA), in Rasht, a 45 years old worker of a dairy company, died by electrical shock in the workplace. Moreover, Baloch activists campaign reported the death of a 35 years old construction worker in his workplace in Iranshahr.

In the morning of December 10, 2018, a prisoner in Urmia prison was executed.Younes Azizi was transferred to a solitary confinement earlier. He was from Naqadeh a city in West Azerbaijan and was accused of drug crimes.

Iranian Labor News Agency (ILNA) reported that five individuals who were arrested with a murder charge, finally were saved from execution in jail by the help of judicial authorities and victims’ families’ consent. They had spent the last 4 years waiting for the execution in prison. The murder took place in 2014 in a tribal fight. Four people died, and more than 40 people were injured in that incident in second district of Zouyie village which is in Shadravan district in Shushtar County in the Khuzestan province.

Majid Azizi, a civil activist from Shiraz who is in Adel Abad prison was deprived from getting pharmaceutical drug by prison officials. His family are concerned about his health. On November 19, 2018 he was transferred to Adel Abad in Shiraz for his one-year imprisonment.

Political prisoners in Ardabil prison went on strike from December 9, 2018. They are protesting the transfer of an infected contagious prisoner to their prison without informing the other inmates, and the other limitations such as cutting off the phone in prison.

Atena Daemi, an imprisoned activist wrote an open letter for international day of Human Right about human rights violations in Gharchak prison. She wrote about sanitary in this prison “there is not any spot clear from blood and vomit”. She also mentioned that the quality of water is low, there is no dental health, and prisoners’ hands and legs are swollen. Overall, there is a very limited access to the medical care and it would be humiliating and offensive.

Ghasem Shole Sa’adi and Arash Keykhosravi, attorney at laws were sentenced to six years in prison by branch 15 of Islamic Revolutionary Court.

Hamidreza Rahmati,a teacher activist, has ended his sit-in by the Shahreza’s Ministry of Education office. He was protesting the arrest of the teachers during teachers’ strikes since December 1st, 2018.

The 21st day of detention of Ismael Bakhshi, laborer activist and Sepideh Gholian, civil activist.  They were arrested in course of Haft Tappeh Sugarcane Agro-Business protests.

Arman Ghafouri, the resident of Marivan, was released on bail temporary on December 10, 2018.

On Sunday, December 9th, the Human Right Committee of Lawyers, organized a conference for the international “Human Rights Day” which marks the 70th anniversary of the Universal Declaration of Human Rights with the subject of“celebrating the differences”. Mohammad Hashemi, Afshin Ala, Hatam Ghaderi and Saeed Madani were some of the lecturers of this conference.

At least 10 civilians arrested in Marivan while supporting Kubani 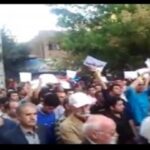 HRANA News Agency – Marivan and Mahabad residents had a demonstration in support of the Kubani (Kurdish city in Syria). The gathering in Marivan turned violent with the intervention of police and at least ten people were arrested.

According to the report of Human Rights Activists News Agency (HRANA), on September 8th hundreds of residents of Mahabad and Marivan, Kurdish cities in Iran, had a peaceful demonstration in support and solidarity with kubani, Kurdish city in Syria that is scene of a full-scale war. END_OF_DOCUMENT_TOKEN_TO_BE_REPLACED

HRANA News Agency – During the last few days and while simultaneously celebrating the Army Day in the Islamic Republic of Iran, tense situation and tight security measures have been imposed in the city of Mahabad [Northwestern Iran, Kurdistan].

According to a report by Human Rights Activists News Agency (HRANA), the city of Mahabad has witnessed an increased presence of military and security forces throughout town in the past two days.

Police forces, Iranian Revolutionary Guard, the local Basiji militia, and plainclothes officers have been positioned on and around Hekmat Bridge, streets leading to Koohsar and Madar Squares, stations 1 and 2 of Farhangian region, Mokhaberaty Farhang Street, Salehi Farhangian Street, the hills around Melat Park and the region surrounding this park.  The heavy presence of security and military forces has created a tense atmosphere of fear and apprehension.

Additionally, the presence of military and police vehicles throughout the city has caused heavy traffic and is interfering with the daily lives of the residents.

Unlike previous years, simultaneous maneuvering of military troops and police forces has been conducted between Koohsar and Madar Squares.