Dozens arrested in Tehran in a protest at acid attacks 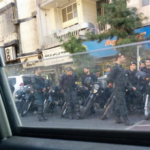 According to the report of Human Rights Activists News Agency (HRANA), People who were planning to protest in front of the Interior Ministry against the recent acid attacks on women who not dressed appropriate “Hijab” were met by violent security and anti-riot police forces. END_OF_DOCUMENT_TOKEN_TO_BE_REPLACED