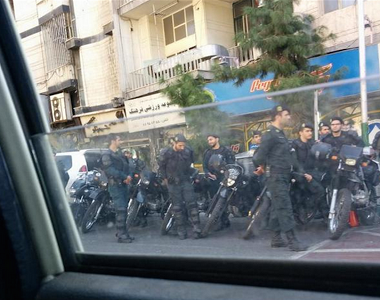 According to the report of Human Rights Activists News Agency (HRANA), People who were planning to protest in front of the Interior Ministry against the recent acid attacks on women who not dressed appropriate “Hijab” were met by violent security and anti-riot police forces.

In the meantime, others like Nasrin Sotoudeh, Giti Pourfazel, Abbas Jamali, Peyman Aref and Farid Rohani, were detained for about two hours and then all of them were released at the scene except Nasrin Sotoudeh.

Finally, after 7 hours, Nasrin Sotoudeh was released, too.

In addition, Police officers also arrested 160 women and seven men and transferred them to the “Fight against the Social vice Center” (known as Vozara).

One of the detainees told HRANA’s reporter: “The total number of women detainees who were taken to Vozara was about 160. Most detainees were released in two series by the Vozara officials. First group was 89 person and group two, 70 and about 5 to 7 people are still in detention.”

He added: “Maliha Garshasbi, despite aging, is still in detention just because she has a record of participation in the gatherings. She is 50 years old. Alongside her, 4 other women who had a history of participating in meetings are held in detention, too.”

Regarding the officials’ behaviour towards the women detainees, this source said:” The police officers were behaving very bad and nasty with the ladies and were beating them while arresting them”.

In addition, about the men who were arrested in the gathering, he said: “6 to 7 men have been arrested and are held in the upper floor in Vozara. They were severely beaten and are still there although women have been released.”

According to latest news, one of the men also has been released.

Also, the news from Esfahan indicate that people who had planned to hold a rally in front of the Esfahan Municipal center were dispersed with tear gas and batons by the Security forces and riot police. Observers at the scene of the collision said that the police officers were very harsh and nasty.