According to the Human Rights Activists news agency, at least nineteen Iranians of Sunni Arab origin have been detained in various cities in the country’s Khuzestan Province.

The group said that it was common practice for the security forces to round up citizens with Sunni Arab backgrounds ahead of Eid al-Fitr, a Muslim holiday that marks the end of the holy month of Ramadan.

In February, Ardeshir Amir-Arjomand, a top advisor to opposition leader Mir Hossein Mousavi, condemned the violent clampdowns in the province.

“The security, territorial integrity, independence and sustainable development of the country can only be realised with the participation of all Iranian citizens irrespective of their gender, language, ethnicity, religion or political leaning, and in accordance with accepted international human rights conventions,” said Amir-Arjomand, who is also the spokesperson for the Coordination Council of the Green Path of Hope, the opposition Green Movement’s leading decision-making body.

“The use of unjustifiable violence in dealing with the legitimate demands of ethnic and religious minorities is in violation of national interests and the [Islamic] Revolution’s fundamental ideals,” he added. “The Coordination Council of the Green Path of Hope condemns the repression, arrest and the illegitimate use of violence against Khuzestani citizens who pursue their demands through peaceful means.”

Rights groups have repeatedly documented the discriminations against ethnic Arabs and the lack of socioeconomic development in the region. 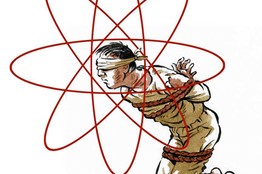 END_OF_DOCUMENT_TOKEN_TO_BE_REPLACED

Student Activists to Obama: “End US Appeasement Policy towards IRI”

HRANA News Agency – On the 32nd anniversary of the day when the American embassy in Tehran was occupied by student activists in 1979, nineteen former and current student activists have written a letter to President Obama to ask him to end the US appeasement policy towards the Islamic Republic of Iran.

Bamdad Khabar Website has released the complete contents of this letter as follows:

Your Excellency, the President of the United States of America,

With greetings,
Last year on a day such as this, a group of student activists wrote a letter to you to direct your attention towards human rights violations in Iran and your moral obligation to support our oppressed nation.

On November 4, 1979, a group of Iranian student activists who called themselves “the Followers of Imam’s Line” attacked the United States embassy in Tehran and took American diplomats and workers hostage.Because according to International Law, embassies are the sovereign soil of the countries they represent, this action was a grave mistake resulting in serious damage to Iran’s national interests.

While thirty two years have passed since that event took place, revolutionaries of those days have been taken hostage by the Islamic Republic of Iran and even the same student activists are imprisoned today.

During the last few years, our nation has shown time and again that it desires to be set free from the claws of the current regime.Two years ago, while Iranians were facing bullets and batons in the streets, they asked you, “With whom do you stand? With the regime or with the people?”

People’s voices were heard shouting, “Obama, Obama, either with them or with us.”Addressing you directly, our nation asked you for help, but your advisors directed you to negotiate with the “hostage takers,” the Islamic regime that has taken our nation captive.As a result, the Islamic Republic of Iran comfortably and confidently continued to suppress peaceful demonstrations in the streets of Tehran.

What did you gain from extending a hand of friendship towards the Islamic Republic of Iran?The regime replied back by taking three American hikers hostage, sent weapons to terrorist groups in Syria, Lebanon, Afghanistan and Nigeria, plotted to assassinate the ambassador of Saudi Arabia in Washington DC and continued to pursuit developing nuclear weaponry.

Mr. President, currently, our brothers and sisters in Syria are fighting against the brutal regime of Bashar Assad.As a result, more than 4,000 Syrians have been killed and tens of thousands have been imprisoned and injured.Meanwhile, the statesmen in Tehran maliciously continue to support the dictatorship of Syria because they know that their fate is tied to that of Bashar Assad, and their turn will come soon.

Our brothers and sisters in Syria have asked for your support by declaring a no-fly zone over parts of the Syrian air space in order to prevent further killing of the dissidents by the oppressive regime.Further negligence of the US government on this matter is not acceptable.We recommend ceasing the US appeasement policy towards Damascus and not repeat the same mistake made while dealing with the Green Movement in Iran.Stand by the Syrians, and ignore the demands made by dictatorships such as Russia and China.

Your Excellency, Mr. Obama, you are not only the president of the most powerful government in the world but also the winner of the Nobel Peace Prize.Hence, your moral objection towards establishing peace and protecting human lives has been doubled many times over.In our letters written in the past years, we asked you to follow up on violations of human rights especially those aimed towards students in Iran.

Three American hikers together with many Iranian students can testify about what is happening in prisons throughout our country.In recent weeks, the situation has deteriorated such that the Islamic regime has begun flogging student activists whose prison terms have ended.The annual report released by the Secretary General of the United Nations and the report written by the Special Rapporteur of the United Nations, Dr. Ahmad Shaheed, reveal only a small portion of human rights violations not only in prisons but also throughout our country.

During the last decade, passive policies and the negligence of the international community resulted in the creation of a nuclear regime in North Korea.If the Islamic Republic of Iran is allowed to develop nuclear weaponry, the same mistake will be repeated; such a debacle must be prevented.

Let us say it clearly and loudly that we don’t wish for your military intervention in Iran and warn you about its unintended and adverse consequences under the current conditions.We hereby ask you to do what the US government has announced itself.We ask you to take sanctions against the highest government officials in the Islamic Republic of Iran and their immediate relatives and partners seriously.Blocking their bank accounts and properties and banning their trips outside Iran are also equally important.

We also request to impose sanctions on all companies whose shares are owned by the Army of the Guardians of the Islamic Revolution (IRGC) and their high ranking executive officers.We ask you to help our nation to have easy access to the Internet and satellite programs and make free flow of information possible.We want you to fight against censorship, Internet filtering, and deliberate jamming of radio and TV signals with the intention to disrupt communications and the surveillance of dissidents in Iran.We ask you to severely punish all governments and companies that help to facilitate such actions in Iran.

We request from you to remain committed to the sanctions imposed on the commanders of IRGC and individuals violating human rights in Iran.We ask you to place pressure on governments, organizations and companies that violate the terms of such sanctions.We want you to pressure your alias not to assist the Islamic Republic of Iran by supporting the sanctions against the regime.We ask you to pay attention and be aware of the media funded by American tax-payers but used as a soapbox to promote an appeasement policy towards the supports of the Islamic Republic of Iran, anti-west and anti-American trends.

We call for imposing sanctions on the Central Bank of the Islamic Republic of Iran and a ban on the purchase of oil from IRI because the Islamic regime uses the funds to build and further strengthen its intelligence and military apparatus instead of providing economic resources for our nation.The Islamic Republic of Iran also utilizes the revenue from the sale of oil to support and spread terrorism and oppresses democratic movements throughout our country.

We request to end the appeasement policy towards dictators.Instead, empower our people who once bravely poured into the streets of Iran but returned home disappointed due to the lack of support from the international community and also the brutal oppression of the regime.And let Iranians know and feel that they can achieve what they set out to do.

There are many ways to reach these goals, but you must possess the will to pursuit them.

HRANA News Agency – Sakhi Rigi, a blogger and a member of Mir-Hossein Mousavi’s Campaign Staff, has been sentenced to twenty years in prison by the Revolutionary Court in Zahedan [Sistan and Baluchistan Province].

According to a report by Human Rights Activists News Agency (HRANA), Sakhi Rigi has been exiled to the city of Ahvaz [in Khuzestan Province] to serve his sentence in Karon Prison.Sakhi Rigi is a civil rights activist who was arrested during presidential elections in 2009.On June 18, 2009, while he was driving his car, Sakhi Rigi was stopped on Zahedan University St. by the security forces and subsequently detained.

While he was in the custody of Iran’s Intelligence Agency in Zahedan, Sakhi Rigi endured seven months in solitary confinement and was charged with acting against national security and propaganda against the regime.Three months ago, Sakhi Rigi was transferred to Karon Prison to begin serving his twenty year term.

Sakhi Rigi is a 31 year old college student who was studying software development before being arrested and had only two terms left before graduating.It is not clear what other charges have been filed against him to justify issuing such a heavy sentence for this college student.However, it has been said that his blog postings were considered a crime and a threat to national security.

According to Kalameh, Yazdanfar who is Mousavi’s most senior bodyguard and head of security was arrested moments ago by police forces.

We will post a more complete report on this breaking news as soon as possible.