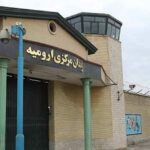 Human Rights Activist News Agency (HRANA) – Forty-two-year-old political prisoner Mohyeddin Ebrahimi has been convicted of cooperating with a Kurdish opposition party and sentenced to death by Judge Ali Sheikhloo in Branch 2 of Urmia’s Revolutionary Court. He is currently being held in Section 12 of Urmia Prison in northwestern Iran.

A close source told HRANA that Ebrahimi has been recovering from three gunshot wounds for the better part of a year in the Urmia Prison clinic. He was shot during his arrest on October 23, 2017, at the Iran-Iraq border, where he was found to be carrying a walkie-talkie and accused of alcohol possession.

HRANA’s source indicated the court was flippant in its verdict on Ebrahimi’s case, verbally presenting the charge of “cooperating with a Kurdish opposition party” — punishable by death — while skipping over portions of the judicial process provisioned by law, e.g. formal questioning, providing him with a hard copy of his charge sheet, or the hearing of any statements in his defense.

Ebrahimi’s record shows a history of alcohol charges: a 2010 arrest for which he spent 11 months in Urmia prison before being acquitted, and a 2014 charge that was eventually dropped due to lack of evidence.

Mohyeddin Ebrahimi is from the village Alkaw, near the city of Oshnavieh, West Azerbaijan Province.