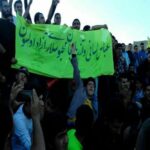 According to the report of Human Rights Activists News Agency (HRANA), these activists picked up a placard on which they had written: “Abbas Lesani, Azerbaijani activist must be released” during a football match between “Shahrdari Ardebil” and “Aluminum Hormozgan”. END_OF_DOCUMENT_TOKEN_TO_BE_REPLACED