Additional Information on the Latest Executions in Ghezel Hesar Prison 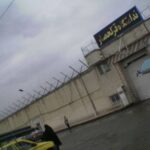 According to the report of Human Rights Activists News Agency (HRANA), 11 prisoners from different prisons including 4 from Central Prison of Karaj, 4 from Great Prison of Tehran, 1 from Ghezelhesar prison, 1 from Rajaei Shahr and one female prison from an unknown location had been transferred to solitary confinements of Ghezelhesar prison for execution. END_OF_DOCUMENT_TOKEN_TO_BE_REPLACED