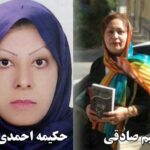 Human Rights Activists News Agency (HRANA) – In their continued persecution of Azerbaijani activists, security forces attempting to extract confessions have reportedly battered two of them severely, landing one in the hospital with broken ribs and injured fingers.

Without explanation, agents arrested Nasim Sadeghi and Hakimeh Ahmadi within three days of each other in late October 2018, and sources close to both women report that they have since been subjected to beatings. In a video he published October 30th, Ahmadi’s husband Gholamreza Ghorbani related the news of her injuries and hospital transfer, explaining that authorities had refused to disclose where she had been admitted, forbade him from visiting, and advised him that pending treatments would be at his expense. Sadeghi, who was transferred from an IRGC intelligence detention center to Tabriz Central Prison on October 29th, confirmed on a phone call with her family that authorities were applying brute-force coercion to make her own up to their allegations, threatening to arrest her children and her sister’s children if she didn’t confess.

Security forces arrested Ahmadi on October 18th after inspecting her home and threatening her and Ghorbani with a close-combat weapon; Sadeghi was taken by security forces on her walk home October 21st.

Though Sadeghi and Ahmadi were not told the reasons behind their arrests, an assistant in Branch 19 of the revolutionary and general prosecutor’s office recently explained Sadeghi her charges: “propaganda against the regime through anti-regime news activity in cyberspace.” Initially offered bail during an October 25th court appearance, Sadeghi was kept in custody when security forces objected to her release.

Sadeghi was finally released Wednesday, October 31st on a bail of 150 million tomans [approximately $3,500 USD]. As of the date of this report, Ahmadi’s location and charges are still unknown.

Both Ahmadi and Sadeghi have previous arrests on their records. Ahmadi was detained this past September and released on a bail of one billion Rials [approximately $7,000 USD]. On July 28, 2016, Sadeghi was among dozens arrested for their participation in a public protest against controversial comments published in the newspaper Tarh-e No. She was interrogated for five days in the Intelligence Detention Center of Tabriz for charges of “acting against national security through propaganda against the regime,” brought by Branch 7 of the Prosecutor’s Interrogation Office of Tabriz Revolutionary Court. She was released on a bail of 1 billion IRR [approximately $8000 USD] pending trial.

Azerbaijani activists have felt the pressure of intensified security controls in recent months. Rahman Ghasemi and Abolfazl Fakouri, recently arrested in Tabriz for unknown reasons and transferred to undisclosed locations, are two more among many who have been unceremoniously swept up.

Ghasemi, an Urmia resident, was summoned and interrogated by Urmia security forces this past September. On July 7th, he was arrested amid security crackdowns on an Azerbaijani cultural gathering at Babak Fort and released four days later.

Per a recent announcement, the appeals hearing of Azerbaijani activist Kiumars Eslami, also arrested and charged for his presence at Babak Fort, will take place November 17th at 10 a.m. in Branch 1 of Ardebil Appeals Court. Eslami’s cultural activism — including his membership in the Parsabad county Pan-Turkic movement and translation of Persian-language books into Azerbaijani — have earned him accusations from authorities of being “sectarian” and propagandizing against the regime.

Tabriz is the capital of the northwestern province of Eastern Azerbaijan, which borders the Republic of Azerbaijan and is home to Iran’s Azerbaijani ethnic minority. Fort Babak, a monument built during the pre-Islamic Sasanian period, is the namesake of Babak Khorramdin, who led an uprising against the Abbasid caliphate in 893. In recent years, it has become a place of symbolic gathering for Azerbaijani activists, especially during annual commemorations held in the first week of July.