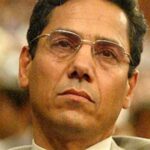 HRANA News Agency – A group of current and former political prisoners of Rajaei Shahr prison, who have served along with Abdulfattah Soltani, imprisoned lawyer, in a letter expressed their sorrow for the loss of his mother and thanked him for his continuous efforts for human rights.

According to the report of Human Rights Activists News Agency (HRANA), following the death of Abdulfattah Soltani’s mother, a group of political prisoners of Rajaei Shahr prison expressed their condolences and thanked him for accepting to be their attorney and also, his efforts for human rights. END_OF_DOCUMENT_TOKEN_TO_BE_REPLACED