According to the report of Human Rights Activists News Agency in Iran (HRANA), 11 prisoners of Ward One of Zahedan Central Prison are on death row, and despite the adoption of a new anti-narcotics law, which revises nearly 15,000 cases of prisoners, these 11 prisoners remain sentenced to death without changing their legal status. END_OF_DOCUMENT_TOKEN_TO_BE_REPLACED 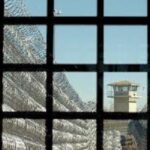 HRANA News Agency – A death row prisoner in central prison of Zahedan who suffered from pain and illness in the eye, was harassed and exiled to the quarantine ward by the order of authorities when he could not pay 800000 IRR for the cost of the test.

According to the report of Human Rights Activists News Agency (HRANA), Shamseddin Baji Zehi, death row prisoner who has been charged of murder, has been imprisoned for four years in the central prison of Zahedan. END_OF_DOCUMENT_TOKEN_TO_BE_REPLACED