Three kids died in a mortar explosion in Soosangerd 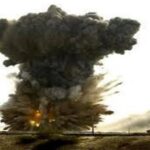 One of parliamentarians declared a while ago that after Iran-Iraq war yearly 200 have been killed by mine explosions. During the eight years of Iran-Iraq war more than 20 millions of various types of mine and explosives have dispersed in an area around 42 thousands square kilometers in five provinces -West Azerbayejan, Kurdistan, Ilam, Kermanshah and Khouzestan. END_OF_DOCUMENT_TOKEN_TO_BE_REPLACED