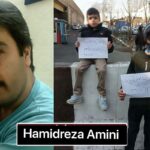 Human Rights Activists News Agency (HRANA) – On Sunday, August 12, 2018, a court hearing was held for Hamidreza Amini, the admin of a telegram channel, in branch 9 of Tehran’s criminal court, presided by Judge Kashkuli. Mr Amini was charged with “Insulting the Prophet” and “Blasphemy”.

Mr Amini’s lawyer, Mohammad Hossein Aghasi, confirmed the news and told HRANA that he anticipates for the “Insulting the Prophet” charge to be dropped and that the outcome of the trial should be announced in the coming days.

On June 11, 2018, HRANA reported that a scheduled court hearing for Hamidreza Amini to investigate the charge of “Insulting the Supreme Leader and other high-ranking Iranian officials” was postponed by branch 15 of the Tehran Revolutionary Court, presided by Judge Salavati. The hearing was reportedly postponed based on Article 48 of Iran’s Penal Code and to give Mr Amini time to select a court-appointed lawyer.

An informed source had told HRANA in June: “During the court session, Hamidreza Amini said he would not answer any questions without the presence of his lawyer, Mohammad Hossein Aghasi. Judge Salavati responded that his lawyer’s name is not on the list of 20 court-appointed defense lawyers. As a result, Mr Aghasi was not allowed to attend the hearing. His trial was delayed until the appointment of a lawyer.”

On May 30, 2018, Hamidreza Amini was reportedly sentenced by Branch 57 of a new court focused on media crimes to pay approximately a $4,000 USD (40,000,000 Rials) fine for the charge of publishing lies (against officials, government organizations and institutions) with the aim of disturbing public opinion.

Hamidreza Amini has been detained since December of last year on charges of “Disseminating lies”, “Blasphemy” and “Insulting high-ranking officials of the Islamic Republic”. He was arrested by security forces on December 2, 2017, and transferred to solitary confinement in Evin Prison’s Ward 2A, a section of the prison under the control of the Islamic Revolutionary Guard Corps (IRGC).