The Time Line of Ahmad Tamouyi’s Imprisonment since 2009 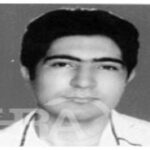 HRANA News Agency – Ahmad Tamouyi, political prisoner of Uremia prison, has been kept in different prisons, since 2009. He has suffered from many different tortures like being lashed, beaten, being hanged and being burned by cigarettes. He is currently kept in ward number 12 of Uremia prison and is serving the 9th years of his sentence of 15 years. Following report which has been prepared by HRANA, is about what this political prisoner has experienced throughout these 9 years of imprisonment.

Ahmad Tamouyi was arrested by the IRGC forces on October 24, 2007, in Mahabad close to historic place of Sahoulan cave, while he was sitting on his motorcycle. Then he was transferred to Uremia prison. END_OF_DOCUMENT_TOKEN_TO_BE_REPLACED

According to the report of Human Rights Activists News Agency (HRANA), Amnesty International published a statement and said Yousef Kakehmami, imprisoned Kurdish farmer in Uremia prison who is currently serving his 9 years after “two unfair trials”, has been sentenced to further 5 years in prison after writing a letter to the UN Special Rapporteur. END_OF_DOCUMENT_TOKEN_TO_BE_REPLACED