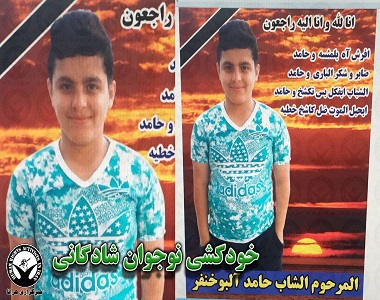 HRANA News Agency – On December 24, a 14-year-old teenager in Shadegan in Khuzestan hanged himself and died.

According to the report of Human Rights Activists News Agency in Iran (HRANA), Hamed Albokhanfer, 14-year-old boy from Shadegan city in Khuzestan province hanged himself and died on December 24.

A close source to his family told HRANA’s reporter, “On Friday afternoon, Hamed was found hanged by his father’s Chaffiyeh and he died unfortunately.”

The reasons of the committed suicide are not known yet.