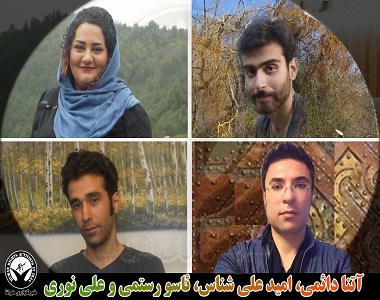 HRANA News Agency – The sentences of four civil rights activist, Atena Daemi, Omid Alishenas, Aso Rostami and Ali Nouri were reduced at branch 36 of appeal court from 14, 10, 7 and 7 to 7, 7, 2 and 2 years of imprisonment.

On July 5, the trial of these activists in this branch was postponed, because of the absence of two of three judges, and absence of one of the defendants.

Omid Alishenas was arrested on September 4, 2014, and transferred to ward 2-A of Evin prison, which is controlled by the IRGC. Although a bail of 1000 million IRR had been issued for him, the court and the prosecutor’s office eventually did not accept the bail for unknown reasons and he was transferred to ward number 8 for continuation of the interrogations.

Omid Alishenas was released on the bail from Evin prison after 16 months of detention.

Aso Rostami, other defendant of this case, had been arrested along with several others after a gatheringto support Kobani in front of the UN office in Tehran, on Wednesday, October 8, 2014, and after a long time in solitary confinement and interrogation, he was transferred to ward 8 of Evin prison.

He was sentenced to 7 years imprisonment on charges of propaganda against the regime, gathering and collusion against the national security and insulting the supreme leader due to his peaceful civil activities.

Ali Nouri, civil rights activist was arrested during a protest in solidarity with Kobani in front of United Nations’ office on October 8, 2014 and was transferred to ward 2-A of Evin prison, which is controlled by the IRGC and after a long period of interrogations and being held in solitary confinement he was transferred to ward 8 of Evin Prison.

After being released on the bail of 500 million IRR, he was sentenced to seven years in prison.