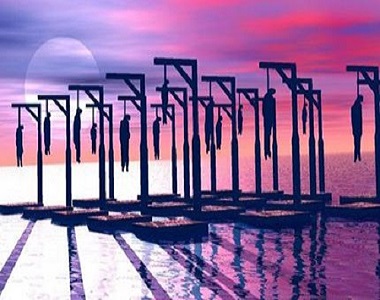 According to a report by Human Rights Activists News Agency (HRANA), the family of Mohsen Jahanbakhsh, the prisoner who had disappeared since last Monday, went to Rajai Shahr prison of Karaj to follow his situation yesterday morning.

One of the prisoners told to HRANA: “17 of these prisoners were from Ghezel Hesar prison and 5 others were brought here from other prisoners. None of them were allowed to visit their families for the last time.”

Mohsen Jahanbakhsh, born in 1977, had attacked the cash carrying vehicle with the cooperation of Seyyed Salaheddin Jafari in 2007 during which one of the guardian’s leg was injured. He was sentenced to death by the branch 15 of the revolutionary court of Tehran on charge of enmity against the God.

Meanwhile 4 prisoners have been hanged in Rajai Shahr prison of Karaj on Wednesday 3rd of July.

Mohammad Jafari from ward 6, Ali Yadegari from ward 2, Karim Taraj from ward 3 and a prisoner from ward 7 whose name is not known yet were hanged in Rajai Shahr prison.

There were 3 others who succeeded in getting the satisfaction of the complainants and 2 who managed to get a chance to pay the blood money.

The Iranian official media has reported none of these executions.