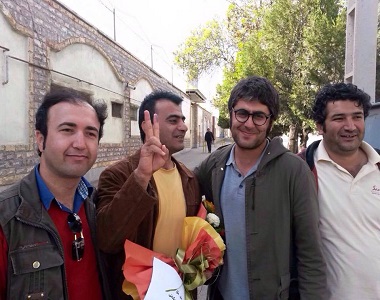 HRANA News Agency – Mokhtar Zarei, Kavan Mohammadpoor and Pishva Salehzadeh were released on bail from Mahabad prison.
According to the report of Human Rights Activists News Agency in Iran (HRANA), Court of Mahabad requested a bail of 150 million Tomans for each of these three prisoners, they were released, when the bails were granted on Tuesday 14th April.
Kavan Mohammadpoor, 28, journalist, was arrested about a month ago in the city of Mahabad, and was taken to the Intelligence Office in Urmia. Kavan is studying sociology at “Payam Noor” University in Mahabad. He is also is the director of social service of Kurdistan Society magazines and literary editor of 7 Tir magazine in Sardasht.
Mokhtar Zarei, political activist who was a member of the Democratic Union of Students, was arrested by the prosecutor’s warrant on Sunday 15th March at his home. He was previously arrested in the winter of 2009 during a remembrance of the second anniversary of the death of Ebrahim Lotfollahi, and after 3 months, he was released on bail and finally, in 2011, he was sentenced to one year imprisonment.Bottom of Form