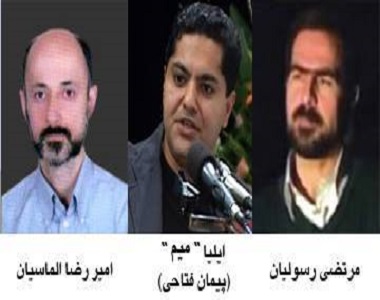 According to the report of Human Rights Activists News Agency in Iran (HRANA), on Friday 7th August, Peyman Fatahi, Morteza Rasulian, and Amir Almasian, three members of a group which is called “Al-Yasin”, were arrested at their home and there is no information about their fate available, yet.

According to Parisa Keynezhad, spokesperson of the theologians group (Al-Yasin) in the UK; Peyman Fatahi was seen on Saturday 8th August at the entrance of the Revolutionary Court in Alborz province, while he was chained, handcuffed and shackled. Keynezhad described that the arrest of these three men was with “Armed attacks and repeated threats to shoot them”. This source said that one of the main reasons for the arrest is their beliefs and religious promotions.

Spokesperson of the theologians group (Al-Yasin) in England, announced that agents who had gone to arrest them, were behaving in the violent collision with assault and out of the norm. The witnesses have heard some scattered contents from Intelligence agents about; teacher training courses, liberal and non-traditional interpretation of the Koran and the Bible, secretly publicizing training and lectures, publishing the spiritual import in Iranian (Modern Christianity, Kabbalah , Toltec, Dalai Lama Mysticism …) and ideas of liberal democracy. HRANA sources have reported that these arrests as well as previous episodes have been conducted by the Ministry of Intelligence, Department of Religions.

Peyman Fatahi who has been arrested for the fifth time since 2007, has an open cases with charges of acting against national security and propaganda against the regime, in the Revolutionary Court. During all these years, still no trial has been held for him and he only has been faced repeated arrests by the Islamic Republic Ministry of Intelligence. Fatahi’s students have announced numerous tortures on him in the prisons of the Islamic Republic, and only in his second arrest in January 2008, he was tortured 32 times.