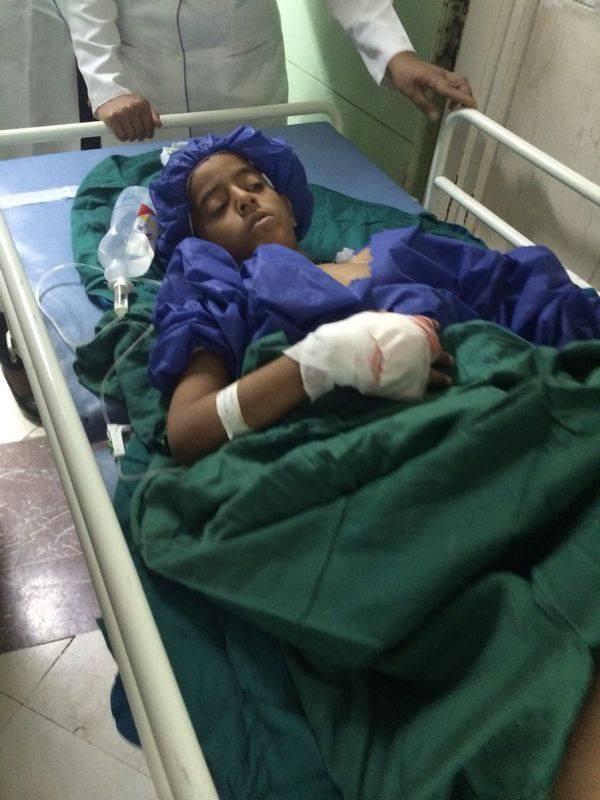 HRANA News Agency – Abdulhamid Gargij, 9-year-old student, was sent to “Imam Ali Hospital”, in Zahedan, because of being whipped by the school teacher.

According to the report of Human Rights Activists News Agency (HRANA), Abdulhamid Gargij, son of Noorollah, 9-year-old, 3rd class student at Shahid Mirhosseini primary school in Mirjaveh city, was sent to operation room in hospital because of  the infection and rupture of the vessel that were caused by being whipped.

In this regard Noorollah Gargij, father of this student said: “on Sunday, 16th November, my son’s school teacher, named Abbasi from Zabol whipped my son on his hands by Gas hose that caused rupture of his hand vessel and severe infection.”

Noorollah who is employee of Health department added: “To get treatment for my son, we transferred him to Zahedan, but Nabi Akram hospital and Boali Hospital rejected him with accusation of his age, although he was admitted by Boali hospital and they made him a hospital file, but later on, with some unacceptable accusations, despite my son’s serious condition, they rejected him.”

The student’s father continued: “At the moment, my son is in Imam Ali hospital of Zahedan and on Sunday (23rd November) he was taken to theater for washing his hand’s infection, and he is supposed to have a surgery on his hand veins.”

Noorollah added: “My son’s school teacher told us that he will bear all cost of the hospital.”

Beaten student’s father, who did not relish complaining against the school teacher, said: “So far, we did not sue the trespasser tutor.”