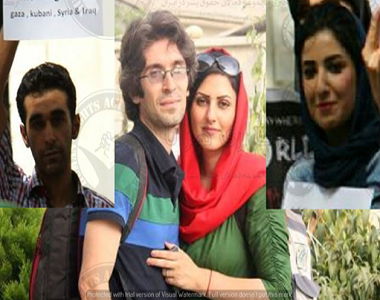 According to the report of Human Rights Activists News Agency (HRANA), Arash Sadeghi and his wife, Golrokh Iraei along with two of his friends were arrested at their workplace on September 6th.
Friends of this couple were released after a few days, but Arash and Golrokh are still detained. They have had only one telephone call with their families.

An informed source said: “Arash Sadeghi and Golrokh Iraei are kept in ward 2-A of IRGC and Golrokh said that it most likely the she will be released soon in a contact with her relatives.”

Relatives of Athena Farqdany say that she was arrested about three weeks ago and she is also detained and interrogated in ward 2-A of IRGC. At the time of the arrest, officers searched her house and confiscated her personal belongings. She is still undecided held in this detention center.
Omid Alishenas, civil rights activist, who was arrested on Thursday 4th September, has been able to contact his relatives twice so far.

A relative of him told HRANA’s reporter: “Omid has had contact with his family twice and every time when his family asked him where you are calling from, the call was cut. His family says that he is, in all probability, held in ward 2-A of IRGC.”