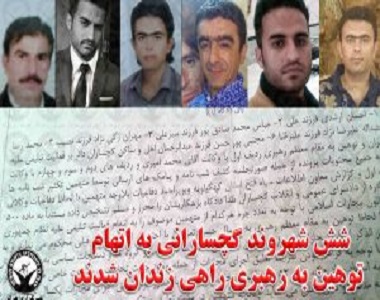 HRANA News Agency – On January 30, 2017, six activists from Gachsaran village in Kohkiloyeh and Boyerahmad province, were imprisoned.
According to the report of Human Rights Activists News Agency in Iran (HRANA), Mojtaba Pourhassan, Abbas Mohammad Sadegh Pour, Mehran Zaki, Ehsan Arshadi, Mohammadreza Mobaraki and Abdullah Alirezanejad, six civilians from Gachsaran village in Kohkiloyeh and Boyerahmad province submitted themselves to Gachsaran prison to serve their 2 years in prison sentence.
It should be noted that according to previous reports of HRANA on February 7, 2012, following mass graffiti (almost writing salons on walls) in Dill village, the condition of the village was monitored by native Basij forces and Intelligence Ministry.
The second round of graffiti was accompanied by slogans against Ayatollah Husseini and other officials, including Supreme Leader along with the presence of Ayatollah Husseini, representative of experts in the village.
After a couple of graffiti, announcements in connection with the “awareness and anti-oppression and 2009” in about hundred and fifty pages were distributed in one night in 2014.
On December 30, 2013, one of the activists of the village named Abbas Sadeqpour was arrested along with a taxi driver by intelligence officers of the Iranian Revolutionary Guards.
On January 4, 2014, seven other civilians from the village were arrested who were associated with Mr. Sadeghpour.
Their names and additional information which are verified by HRANA are as follows:

Finally, six of the detained citizens, Mojtaba Pourhassan, Abbas Mohammad Sadegh Pour, Mehran Zaki, Ehsan Arshadi, Mohammadreza Mobaraki and Abdullah Alirezanejad were sentenced to imprisonment and suspension provisions and prohibiting of membership in parties, groups and political factions.
According to the issued verdict by Gachsaran revolutionary court, each of them was sentenced by judge Yousef Ahmadi, to two years in prison on charge of insulting the supreme leader, one year in prison on charge of propaganda against the regime and deprivation from membership in political groups and parties.
Need to be mentioned, two activists in this case, with the names of Hamid Mazaheri and Hamid Bozorgzadeh, are still waiting to be tried. 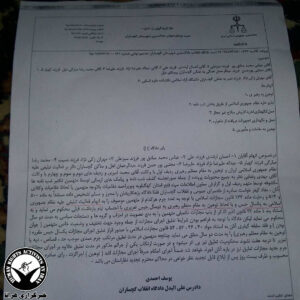 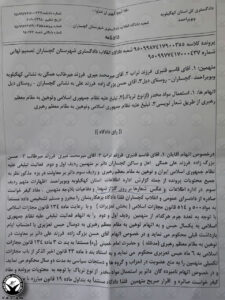 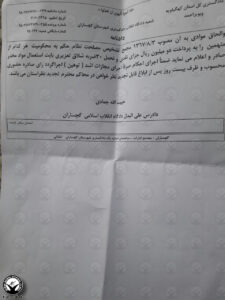