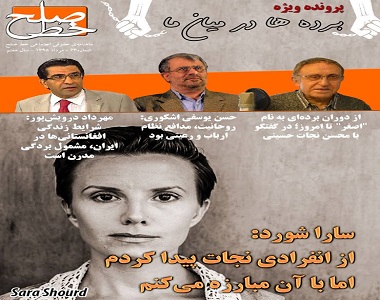 HRANA News Agency – The sixty-third issue of the “Peace Line Monthly” was published.

In this issue and under the title of “Slaves among us”, there are discussions about the exploitation of human being in the modern world in a new form of slavery.

Accordingly, an interview took place with Mehrdad Darvishpour, sociologist at the University of Mlardaln, by comparing traditional and modern definitions of this social phenomenon, as well as the history of slavery in Iran and critics on the Iranian society in denial of this history.

Also, Hasan Yousefi Eshkevari, cleric, describes the clergy before the revolution and their opposition to land reforms of Mohammad Reza Pahlavi.

Also, Mohsen Nejat Hosseini, one of the original members of People’s Mojahedin Organization of Iran before the revolution, has described his views of the modern slave pays around us in an interview.

In another interview, Saeed Peyvandi, professor of sociology in Paris, said about modern slavery and its relationship with the traditional slavery and the causes and its preventions.

Peace Line Monthly in its sixty-third number, also had an exclusive interview with Sarah Shourd, one of three US citizens who were arrested in Iran in 2009 and were in solitary confinement for 410 days. Sarah Shourd now has written a play entitled “The Box” which aims to fight against solitary confinement and psychological torture. It is on the scene in San Francisco, California, America.