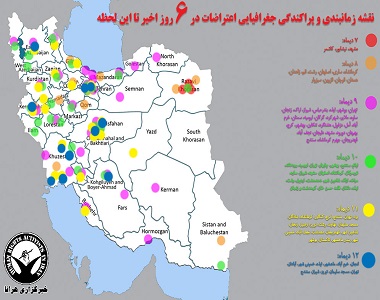 According to the report of Human Rights Activists News Agency in Iran (HRANA), on the sixth day of the popular protests that began on the pretext of economic and administrative corruption, demonstrations continued in many Iranian cities.

On the sixth day of the massive protests, various cities in Iran, including Gohardasht, Lanjan, Khorramabad, Mahshahr, Izeh, Khomeini Shahr, Abadan, Tehran, Masjed Soleiman, Tabriz, Shiraz, and Sanandaj witnessed the presence of protesters on the streets.

It has been reported that protest gatherings led to violence in Masjed Soleyman. Witnesses reported shooting by police forces and using tear gas.

The protests continue while the government began to filter social networks and messengers, including Instagram, WhatsApp and Telegram, from the morning of December 31, to control the situation.

Authorities have confirmed the death of about 21 people, after 6 days since the popular protests began in various cities of Iran.

In this regard, Fars (News Agency) reported that 6 people were killed in Ghahderijan’s clashes, 1 in Khomeini Shahr, 1 member of the Revolutionary Guards Corps in Kahriz Sang and 1 police officer near Najafabad, also the death of 2 people in Saturday’s protests and 10 in Sunday were confirmed.

On the other hand, the general and revolutionary prosecutor of Ardebil province in an interview told Tasnim (News Agency): “Three members of an anti-revolutionary group was arrested in Ardebil.”

The Karaj prosecutor also told Asr Iran (News Agency): “we do not currently provide statistics on the total number of arrested protesters in Karaj during the last few days.” Haj Reza Shakarami merely noted that; “among the arrested people, there were 20 leaders, who were somehow guiding the protests”.

Young Journalists Club has reported that, according to Tehran’s deputy governorate, “433 protesters were arrested in Tehran’s protests”.

The commander of the Sepah Sarallah of Kerman province, announced the arrest of 80 protesters during a news conference on the Basij Press website.

In the following, the Center for Democracy and Human Rights of Kurdistan wrote: “At least 29 protesters in the cities of Urumieh, Ilam and Kermanshah have been arrested by security forces. The arrests of these people are related to popular gatherings that have been held in protest for raise of prices, over the recent days”.

HRANA also announced the transfer of 423 detainees in Tehran to Evin Prison.

Estimates suggest that more than 1,300 people have been arrested so far, that have been officially approved by the responsible authorities.

It should be noted that many people in many cities have gathered in Iran to protest the bad economic situation since December 28, 2017. Security agents used teargases and sprinklers water guns against protesters.

Protesters who had protested in the streets in the early days due to financial problems and bad economic conditions, in recent days, in addition to economic problems, have also severely chanted against the leaders of the country, including the Iranian leader and the ruling system, including Ayatollah Khamenei.

The upcoming video report is a summary of 10 video pieces of protests (January 2) in various cities, verified by HRANA.