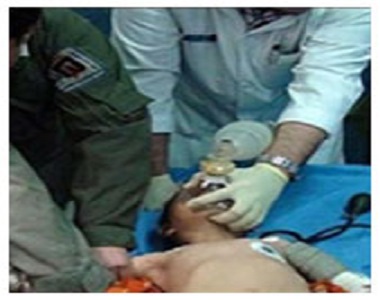 HRANA News Agency – Explosion in a bakery caused hand amputation of a worker.

Seyyed Jalal Maleki, the announcer of Tehran fire-station explained the details for ISNA and said “At 18:19 on Monday an explosion reported to the 125 portal and the firemen from station No.38 were sent to the incident scene in Vali’asr town.”

“After firemen’s arrival to the incident scene they found out that a workplace in underground of a two storey building which was a bakery and ice-cream workplace. The incident happened while a 38 years old worker was checking and fixing the workplace equipments,” Maleki added.

While the worker was working with oxygen appliance the explosion happened and his left hand amputated from the elbow.

“At the same time of incident scene immunization by firemen, they provided first aid steps to the worker and kept his hand in the ice tank”, Maleki said.

Tehran fire-station announcer declared that the mission of firemen was finished at 18:55, after transferring the worker and his amputated hand to the urgency staff.