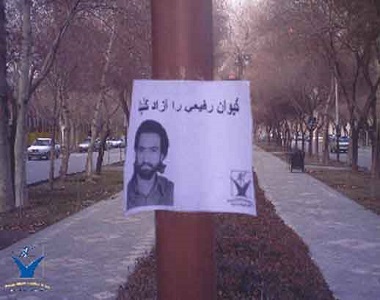 Peace Line Monthly / Behrouz Sadegh Khanjani – I met Keyvan Rafiee for the first time in the winter of 2007, in ward 209 of Evin Prison. A young person who was trying to play his part in improving human right in Iran. I remember he was transferred from solitary confinement to our prison cell, and he was holding a few meaningful painting; all of Keyvan’s Painting showed concern for human rights.

Despite all the dangers of the time, Keyvan Rafiee was trying let the outside world hear the voices of the Political Prisoners. At the time social media’s were not as widespread as today, and those like Keyvan with the little they had tried to let the world hear the voice of the political prisoners so that they would not be forgotten. As I mentioned before, due to the lack of the existence of a widespread social media, quite often political, civil and human right activist would have been imprisoned and nobody would have known. Those years, many were completely forgotten and faced a bitter fate. I believe this is why Keyvan and his friends thought of establishing Human Right Activists in Iran (HRAI). An organization that has become the neutral voice of numerous groups and various spectrums of people. This organization has fought against numerous executions by the Islamic Republic of Iran, which have terrified the global society. HRAI regularly publishes the cruelty endured by various political and ideological groups, and reflects the suppression and pressure on the civil society and its activists in Iran.

At the time two groups were active in regards to the conditions of the Christians in Iran. The first group, were our friends or in reality other Christians who were mostly non-Iranian; but amongst the Farsi and Non-Christian Media, HRAI was the only organization and news resource. During all these years, it has always been this way and HRAI has been able to channel the voice of the Christian prisoners in Iran to the outside world. For instance, on the year that I was arrested, 15 Christian citizens were arrested across the country; then and during those years of silence of media, HRAI was the only media and organization that our arrest mattered to them and notified and informed though Farsi Media.

It’s fair to say that HRAI’s key to success is that it only follows human right motives and does not have smallest glance towards green or purple and such tendencies. This is while, unfortunately many of Farsi Media with tendencies and sides they support, at times scarifies the Human Rights. HRAI has been also able to without any discrimination recognize all the ethnic and minority groups as Iranians and even more so important they have an especial attention towards the rights of a human. Hence HRAI even supports the rights of those committed a crime for instance a drug dealer. In this regard, it does not matter if HRAI supports drug dealing, what matters is that it seeks to create transparency in judicial rulings and to defend the rights of those who have committed a crime.

This humanistic vision bare of violence and discrimination, is a great success for HRAI and I wish HRAI and all those who cooperate with this organization to earn even more success on the path they have chosen.