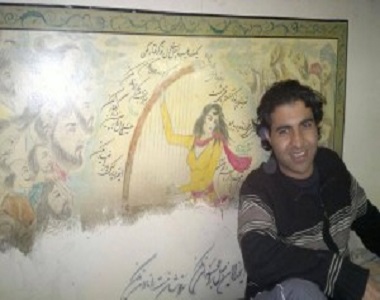 Peace Line Monthly / Ali Ajami – on  May 1, 2006, we – the radical students who became later “Freedom & Equality Seeking Students” and finally dismantled – had decided to join the fired workers who were  protesting in front of  the Syndicate of Workers of Tehran and Suburbs Bus Company.

We were with placards and slogans which had been selected by voting and we thought that nothing was going to happen. Aggregation was performed and we along with the workers started raising the placards and chanting slogans. The police officers were careful and the IRGC intelligence agents took photos regularly, but there were no particular problems, and we believed that the aggregation was going to end with no problem.

As soon as some people who wanted to take report came the police attacked and arrested them, police attacked to one of them who resisted and he got beaten; some of his friends wanted to help him and finally few of them were arrested and few of our friends realized that they were the human rights activists and the one being beaten was Keyvan Rafiee, editor of Human Rights Activists in Iran.

Those days we did not have a good attitude to human rights activists and their works in our opinion were a light action; but it was interesting that police were sensitive about the probable report of aggregation more than the aggregation itself. This was my first encounter with Human Rights Activists.

After December 2007 and extermination of the Freedom & Equality Seeking Students, while our collective feeling was that the important media discriminated about reporting the arrest of more than forty students, Human Rights Activists was among the groups who published news of our friend’s arrest regularly.

After my arrest and when I entered ward number 350, the conversations were about the arrest of human rights activists. All of them were arrested in 2010 and transferred to ward 2-A.By the experience of arrest of our group in 2006 I knew that the security apparatus will not be satisfied until  the complete eradication of the group. My guess was that they were done. Later, after few months of interrogation, a number of them entered ward 350 with heavy sentences.

It was 2011, I was exiled to Rajai Shahr prison. All of political prisoners were gathered in the hall number 12 and were deprived of the phone, it means that they had locked the room where the public phones were and the prisoners could not communicate with the outside world except on meeting days. The reason was clear: News and pressure inside the prison should not be leaked out of the prison.

I met Behrouz Javid Tehrani there. He was one of the activists of July 1999 and was one of the oldest prisoners in Rajai Shahr prison. A few days later an anonymous conscience prisoner, who was harassed while being under detention was transferred to the ward and we wanted to spread his news to out of prison.

In Rajai Shahr prison because of the presence of old political prisoners and their communication with non-political prisoners, there was the access and the possibility to buy a mobile phone, although it was very difficult and expensive. However the prison authorities installed jamming devices around wards to stop this possibility too. This device was manifold around political ward so there was no possibility of sending news by the mobile phone. Even once our strove to break and disable the jamming devices by rock hooks also failed. The only way was breaking the door of the room which has public phone; the problem was that it was possible to disconnect the phone from the center and there was no guarantee that we would be succeed but even a small possibility or a loophole in prison, was worth the risk.

Behrouz looked up the door and it was possible to create a hole to enter into the room by crawling, by breaking down the middle layer of down part and bending sheet metal; but breaking must be very calm and quiet to neither wake up the prisoners nor the guards. During a night behrouz and another friend started the work and I also worked as a guard. I do not remember how hard, they could do it in one or two nights, but finally we did it and the only one who could enter the room by crawling was me. Wood shavings on the floor was not a problem, but winter was extremely cold, and if I wanted to dress, the small cavity space would not allow me to pass. I went crawling inside, turned on the lights, an empty phone room and five or six telephone booths. I picked up the phone of one of the cabins, was a dial tone which means the phone was connected. I called the number, someone replied and introduced himself with the name of Esfandiar, Jamal Husseini, former editor of HRANA.

However, after a few days, prison officials understood and disconnected the phone, but this was a lesson to me that there was always a way, a window, aperture to freedom, and a prisoner knows better than anyone how to appreciate and find it.

When I left Iran and arrived in Turkey, I had decided to leave political activity for ever, means I realized that I could not imagine myself as a political activist from outside the country who was going to change the Iranian society. I was certain that I would not be more active than occasional texts on Facebook and mentioning my friends who were in the prison.

However, it is now about a year since the beginning of my activity in the HRANA, as the editor of the agency we with anonymous activists. I am proud that I have tried to highlight the unique features of HRANA more and more namely fast and accurate reporting and independent human rights reports with the aim of improving it, not only independent of the government, independent of the government opponents, too, avoiding any discrimination and political background, being a window in the walls of the prisons and detention centers, remembering the forgotten, being the voice of voiceless, margins and poor.

Back then, as an outside observer and today from within, I think the Human Rights Activists in Iran has been quite positive and defensible and unique. Activists who are not limited to names that are known, but are a collection of anonymous reporters who were the narrators of distant and silent stories, the elites who because of humility and the fear of repression were never mentioned.

I believe that due to the growth of awareness and communication tools in situations that every citizen is able to record the human rights violations, thanks to the efforts and sacrifices of anonymous reporters, Human Rights Activists and HRANA, will start the second decade of its life in better conditions.