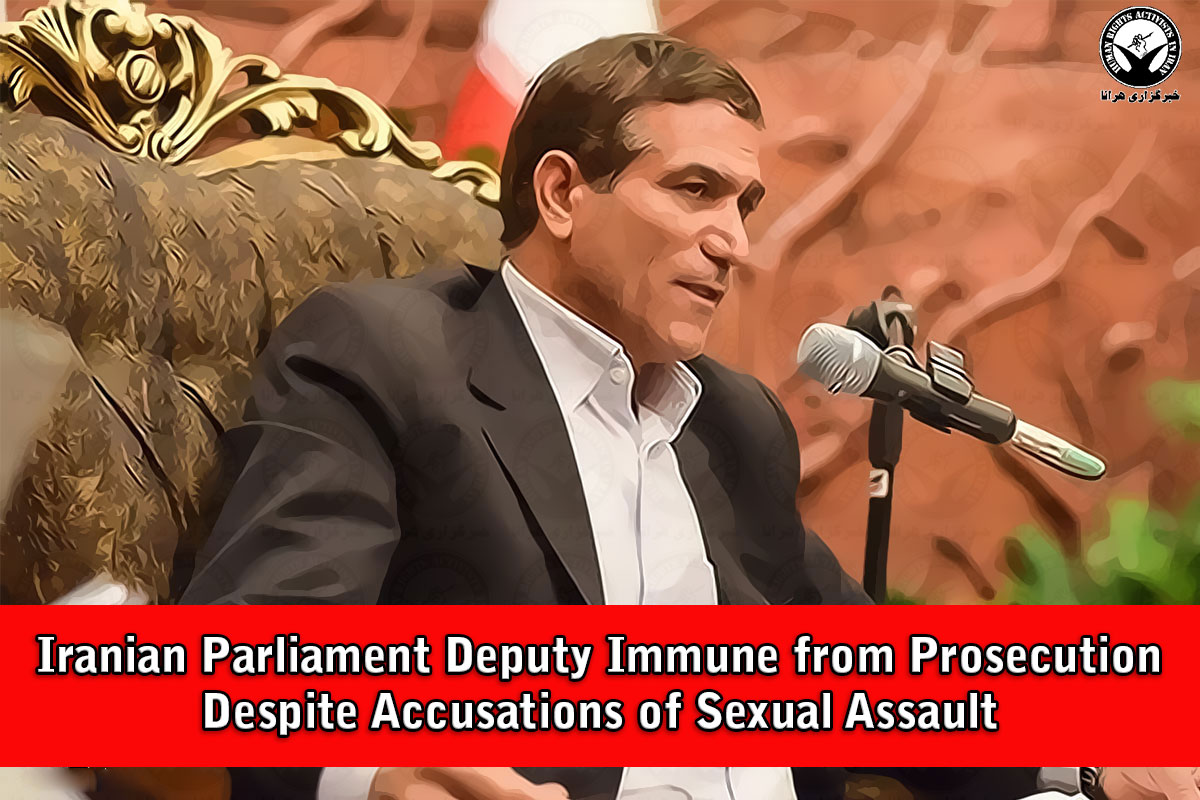 Human Rights Activists News Agency (HRANA) – Based on evidence, documents and testimonials HRANA has obtained from reliable sources, there are at least two new allegations of multiple counts of sexual harassment and assault against Salman Khodadadi, a current Member of Iran’s Parliament and the Chair of the Parliament’s Social Committee. Mr. Khodadadi was previously accused of sexual harassment and assault and was detained on the charge of raping his secretary and a visitor to his office. Mr. Khodadadi held the position of MP and was a member of the Parliament’s National Security Committee and Health Committee from 1996 to 2012. However, in 2012, Iran’s Ministry of Interior barred Mr. Khodadadi from running for Parliament. The Guardian Council reversed the ban in 2016 and allowed him to return as a member of Parliament the same year. In 2014, while Mr. Khodadadi was barred from the Parliament, he was appointed an adviser to Iran’s Foreign Minister, Javad Zarif.

A 28-year-old woman who has asked to be identified as “Z.N.” broke her silence to HRANA. She claims to be a victim of Mr. Khodadadi and that he abused his position of power. Ms. Z.N. claims Mr. Khodadadi sexually assaulted and harassed her for four years. She tells HRANA that she knew Mr. Khodadadi through her father who was Mr. Khodadadi’s colleague in the Islamic Revolutionary Guard Corps (IRGC). After her father’s death, Ms. Z.N. says she was searching for a job due to her mother’s illness and their difficult financial situation.

“One day, I went to the Governor’s office to seek help. I was informed that Mr. Khodadadi would be coming there to listen to the people’s problems. Mr. Khodadadi received my letter and told me to contact him. When I did, he said that he would help me gain a position with the Audit Court.”

According to Ms. Z.N., she followed up with that promise and Mr. Khodadadi invited her to Tehran. Ms. Z.N. says she went with her mother on her first visit but they left without receiving any results. Ms. Z.N. says Mr. Khodadadi contacted her again and advised her to return to Tehran but alone this time. Once in Tehran, Ms. Z.N. allegedly attempted to track Mr. Khodadadi down until she was finally instructed to meet him at his office.

“Once in his office, he locked the door and raped me. He warned me to not tell anyone. I will never forget that day. It was as though the whole world came crashing down on me. My muscles were locked up and I felt paralyzed. He told me I had to leave immediately because a few of his colleagues were coming to see him. I asked him whether his intention was just to rape me, instead of helping me and my family. He replied that he wanted to help and have sex with me too. I left his office and headed to the train station to return home. On the way back, all kinds of thoughts crossed my mind and I even contemplated suicide, but because of my family and their situation, I decided to keep silent…He contacted me after the incident under different pretexts and managed to get me to come to his residential home in Tabriz where he raped me again.”

“After a long period of intimidation and enticement by Mr. Khodadadi, I finally called him to tell him that I didn’t want the job anymore. I told him to leave me alone or else I would file a complaint against him. He replied that I could not do a damn thing to him and hung up the phone on me. After a while he called me back and said that he likes me and wants to talk to me. I did not accept and didn’t go see him. He was even sending me threatening messages that if I didn’t go see him, he would hurt me. I still did not go, and out of fear for my life, I constantly moved residences.”

Ms. Z.N. claims that Mr. Khodadadi had more than one victim. “Some time later, I was with friends when I heard from one of them that Mr. Khodadadi had promised her a job as well and then raped her. This friend wanted to commit suicide on several occasions. That is when I understood that I was not the only victim, but none of the victims are prepared to file a complaint out of fear for their lives.”

“I waited for some time so that he would stop his harassment, but to no avail. I finally called him and begged him to leave me alone or I would tell everyone about what happened. He replied that if I say anything he would have me killed. I was very afraid. I took a train to Tehran and decided to go to the committee responsible for the supervision of MPs. I did not know how to access this committee so I went to the Parliament’ security and told them. First, they did not listen to me until I threatened to go to the Guardian Council. Finally, they accepted to consider my story but said that I would need to provide proof. I told them that I have voice and SMS messages containing threats.”

Mr. Khodadadi allegedly contacted Ms. Z.N. several times after the complaint was filed and said that if she did not withdraw her complaint that he would harm her.

“I told him that I will go through with my complaint because it was my right. He contacted me several more times and told me to visit him to resolve the problem. Again, he promised me a job and pledged to make everything right if I withdraw my complaint. I refused…Since April 2018, when I filed my complaint, I have contacted the Parliament’s security department multiple times, but each time they tell me that they need more time to investigate.”

HRANA has obtained a copy of the documents in Ms. Z.N.’s case, including the threatening remarks made by Mr. Khodadadi. HRANA will consider releasing the documents publicly, but will first consider the victim’s safety and the progress made with the legal proceedings.