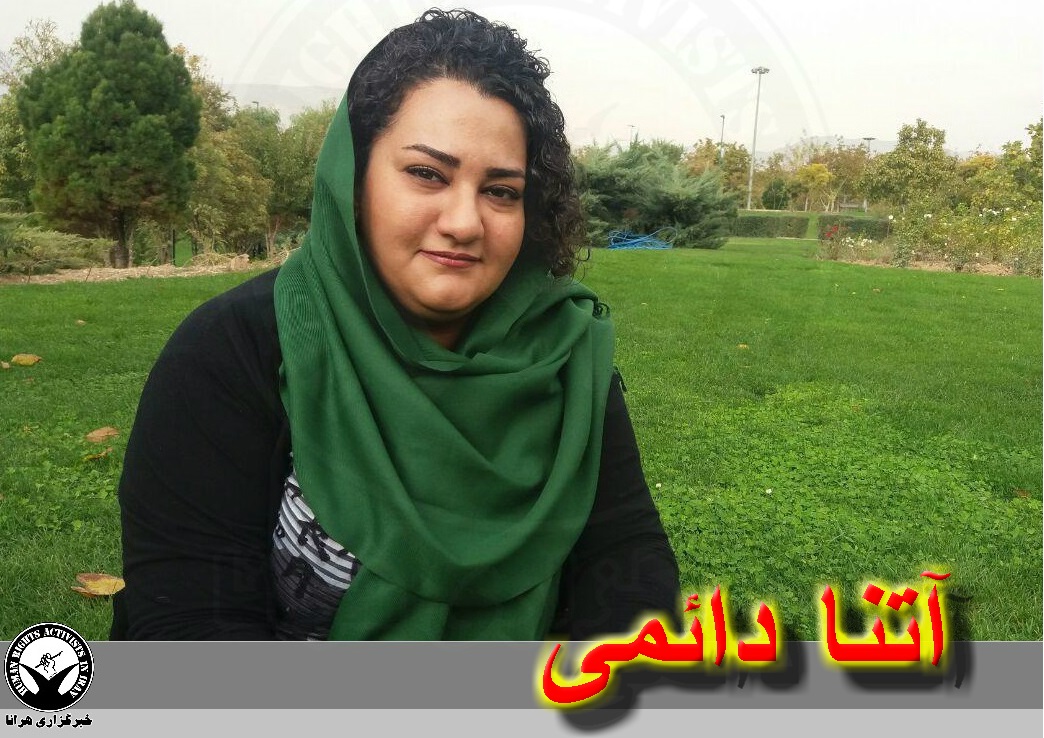 HRANA News Agency – Atena Daemi civic activist in Evin prison was eventually hospitalized and underwent a surgery in Tehran with a long delay after several cancellations of medical programs on October 8, 2017. The previous deportation was canceled by the authorities because of her refusal to close the bracelets and pendants in the surgery room.

According to the report of Human Rights Activists News Agency (HRANA), after a long period of misery at clinic of Evin Prison, Atena Daemi was able to be sent to the hospital and be under the surgical removal of the gallbladder. Her previous surgery appointment on September 25, 2017 was canceled due to her refusal to close the bracelets and pendants in the surgery room.

The surgery was done on October 8, 2017 by recognizing her right not to wear bracelets and pimples while attending the hospital from the point of view of human dignity, as well as providing the psychological and physical conditions necessary for the treatment.

A source close to Daemi family described her condition as satisfactory after the surgery, in a conversation with HRANA’s reporter and told that she was undergoing medical care and was likely to remain in the hospital for few days.

It should be recalled that a specialist in an out-of- Evin prison treatment center visited the prisoner and ordered her to be admitted because of biliary problems in May, at the end of the Atena’s hunger strike. However, she was returned to prison and was deprived of necessary medical service by the intervention of the clinic of Evin Prison and “Abbas Khani”, the responsible for the clinic who accused Ms. Daemi of simulation.

The problems which initially were at the level of “onset of gallstone precipitate and early clay infection” deteriorated. Ms. Daemi constantly suffered from nausea, fever and vomited gallbladder during this period.

Abbas Khani, head of the clinic of Evin prison, claimed that he was opposed to sending her to outpatient clinics, except centers he selects, because Ms. Daemi and her family were trying to produce a medical record.

Finally, Abbas Khani ordered the deployment of Ms. Daemi to Imam Khomeini Hospital. Experiments such as ultrasound were taken from Ms. Daemi and were sent to prison.

The head of the clinic of Evin Prison sent the results of experiments to the prosecutor’s office, Mr. Haji Moradi with a note indicating the absence of a medical problem for Ms. Daemi, based on the results of Imam Khomeini hospital’s experiments.

On this basis, he accused Ms. Daemi of simulation and filed the case against her based on previous argument with the prisoner on charge of insulting the prison authorities.

While Abbas Khani claims that the results of his trustworthy hospital, Imam Khomeini Hospital, indicate that there is no medical problem, Daemi family provided a copy of the results to other physicians, they surprisingly stated that the results of the tests indicated the bile gallstones was filled with stone and advanced kidney infection which requires immediate admission.

Haji Moradi, prosecutor’s representative, had given the results of the tests to the forensic medicine and inquired them on this issue according to the different ideas of different doctors.

Forensic experts also denied the claims of head of the clinic of Evin Prison and stated that the results of Imam Khomeini hospital indicated the unsuitable condition of Ms. Daemi and that removing her gallbladder was required.

Clinic of Evin’s practice of preventing treatment for Ms. Daemi does not rely solely on the reading of the tests, they also gave strong antibiotics to Ms. Daemi with the misdiagnosis which are related to the health of the women, while the infection has been documented in the Ms. Daemi’s kidney part.

It should be noted that Abbas Khani, head of the clinic of Evin Prison, claimed in a letter to the prosecutor’s representative: “We will send her for surgery when the gallbladder’s bile of Ms. Daemi would be shaken by the accumulation of stones, otherwise it would not be necessary to send her.”

He claimed this while the physician believed that the rocks can be taken off by laser for reasons of controllable level of biliary dysfunction in May. But then doctors were not sure of this method and also they claimed that if they had to do the surgery, it would be an infectious surgical operation for many reasons.

Specifically, the progression of the disease and the increase of its dangers are evolving in the clinic of prison’s practice and head of clinic.

All of the above is while Abbas Khani has filed a case against her on charge of “Insulting.” The root of this case is Atena’s discussion with Mr. Khani, because she was accused of simulation by him.

It should be recalled that the head of the clinic of Evin prison, Abbas Khani, filed a case with the same reasons against Maryam Naghash Zargaran, former prisoner in the same way.