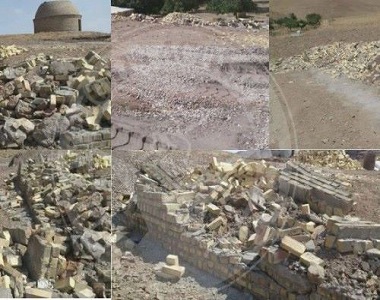 HRANA News Agency – Cemetery of “Ghaleh Gharedash” Village in Takestan was destroyed by road construction machinery during the last week.

According to the report of Human Rights Activists News Agency (HRANA), Security officers used road construction machinery to destroy the cemetery of “Ghaleh Gharedash” Village in Takestan in which lies “Mohammad Ghanbari” a follower of “Yaresan” Religion – Ahle Hagh- during the night.

A well-informed source told HRANA reporter: “Mohammad Ghanbari Self-Immolated in front of Islamic Consultative Assembly on July 27, 2013 in objection to discrimination on “Yaresan” community. His anniversary was supposed to take place on July 31, 2014 at this Cemetery.

This source also added “this cemetery is located in a steep piece of land. Local people paid for it to be levelled and also to be walled in order to make this location ready for the memorial anniversary.