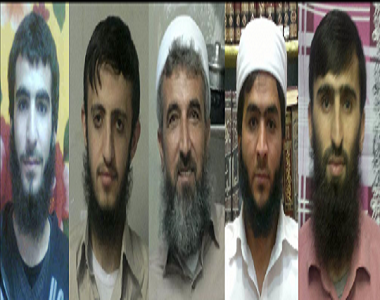 According to the report of Human Rights Activists News Agency (HRANA), the families of the prisoners had tried to appoint a leading Iranian lawyer, Mr Ehsan Mazin, to be involved in the defense of the five death-row prisoners.

However, the head of Branch 28 of the Revolutionary court, Judge Mohammad Moghisseh, had prevented the lawyer from accessing the files.

A source told the HRANA, “The judicial authorities did not consent to the involvement of the appointed lawyer under the pretext that the files were secret and confidential.”

In December 2013, a human rights lawyer who requested to represent the cases of six other Sunni prisoners sentenced to death was also prevented from accessing their cases by Branch 28 of the Tehran Revolutionary court.

Numerous Sunni clerics, preachers and activists have been imprisoned and even executed in Iran, often following unfair trials based on ‘confessions’ obtained through torture. The Iranian regime commonly falsely accuses Sunni preachers of ‘enmity against God’, in an attempt to justify their imprisonment and execution.