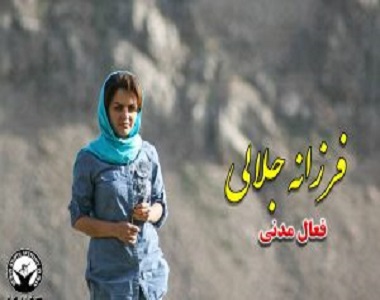 According to the report of Human Rights Activists News Agency (HRANA), Farzaneh Jalali, well-known civil and women’s rights activist was released from intelligence service’s detention centre of Kermanshah on the bail on March 12.

As a reminder, security forces arrested her during administrative works and transferred her to an unknown location, on February 27th.

A close source to Jalali family had told HRANA’s reporter, “Farzaneh had a call from bureau of registry office, and when she went there for administrative works, she was arrested by security forces”.

This source continued, “after her arrest, officers searched her house and transferred her to an unknown location. Efforts made by her family for finding information regarding her condition had no result”.

Later on, it was revealed that Ms. Jalali was transferred to intelligence service of Kermanshah. One of her family member had stated that despite the acceptance of the case by a lawyer, branch number 7 of the interrogation office has rejected him and said, “only after auditing from judiciary and human resources of judicial office, and after it was realized that the name was existing in the list of approved lawyers by the head of judiciary, they would consider that request.”

Farzaneh Jalali is a former member of Islamic Association of Tehran University and former editor of Sobh newspaper in Tehran university.

She became number 6 in general exam for university acceptance in graduate degree in 2011, but she was rejected due to her activities.

It is said that one of recent activities of Ms. Jalali was about Shin-Abad village school’s victims who were injured after a classroom caught fire.