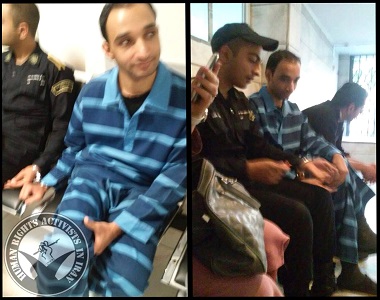 HRANA News Agency – The Forensic in Evin Prison has confirmed Saeed Hosseinzadeh’s inability of serving the imprisonment. The imprisoned civil rights activist should be sent to “Imam Khomeini” hospital for tests and final approval which so far has not been done.

According to the report of Human Rights Activists News Agency in Iran (HRANA), Mohammad Saeed Hosseinzadeh was suffering from numerous illnesses such as  asthma, arthritis, heart and digestive problems during the detention and despite being already sent to the hospital several times, not much of improvement has been achieved so far.

Mr Hosseinzadeh was sent last time to hospital on 16 December 2015 and returned to the ward with no treatment.

Furthermore, despite legal proceedings to challenging the case, his lawyer has not been able to study the case.

The civil rights activist who recently had declared hunger strike to protest against his case procedure and the condition in prison, in a letter had written that suffering from various illnesses such as asthma, arthritis, heart and stomach bleeding and infection problems that affected him during the detention and imprisonment.

He had also written that during transfer to hospital “sabotage and unusual behaviours” led to deterioration of the illness.

Earlier it was announced that Saeed Hosseinzadeh, civil rights activist, imprisoned in ward seven of Evin was sent to hospital because of stomach bleeding. However it became known in the hospital that his stomach problem was due to the arthritis medications consumption.

The doctors told him that he would be encountered with more acute problems if they would neglect his illnesses.

Saeed Hosseinzadeh was arrested on October 2014 at his home by IRGC agents and sent to solitary confinements in ward 2A in Evin Prison.

Mr Saeed Hosseinzadeh is now spending the second year of his sentence in Ward 7 of Evin Prison.