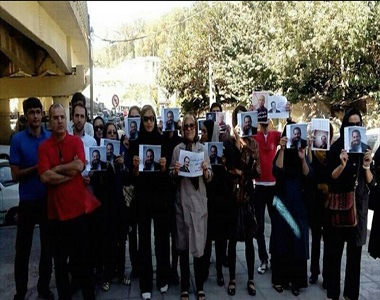 According to the report of Human Rights Activists News Agency (HRANA), after followers of “Erfan-e-Halgheh” faith (Interuniversalism) attended a gathering in protest to the arrest of Mohamad Ali Taheri in front of the Islamic Revolutionary Court, 70 of these followers were arrested by the security forces.  All of these citizens are now released after signing affidavits apart from Masoume Zia”, “Narges Farhadi”, “Malihe Biganian” and “Iraj Amidi”.

A well informed source told HRANA reporter: “those released have signed written affidavits and guaranteed that “they will not teach Faradarmani”, “will not take part in any Interuniversalism classes, meetings or gatherings” and “will not post any informative or news material about interuniversalism and Faradarmani on social media channels such as Viber and Facebook”. They have been told that they are converting Mohammad Ali Taheri‘s case to a political case by participating in gatherings and protests, which in turn would worsen his situation and puts him in danger. Those released have also guaranteed that they will definitely not participate in any activity for Taheri’s release”.

This source continued: “there is no information available on the location of the detention centre in which “Masoume Zia”, “Narges Farhadi”, “Malihe Biganian” and “Iraj Amidi” are kept”.